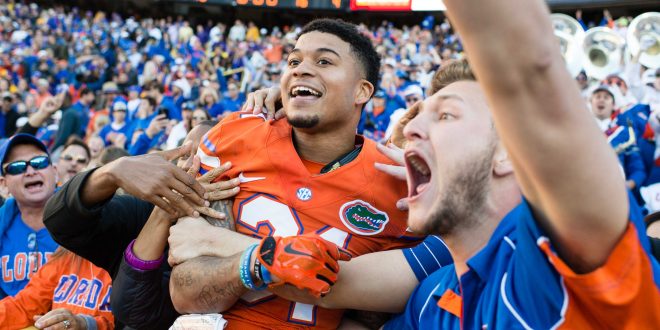 The 2016 All-SEC Coaches Team was announced on Tuesday and six players from the Florida Gators football team made the cut. Overall, Alabama lead the way with 11 representatives for 2016, LSU had nine representatives, followed by Auburn, Florida and Texas A&M with six.

The Gators won the second consecutive SEC East title and now the team is preparing  to take on the Iowa Hawkeyes in the Outback Bowl. Florida finished the 2016 college football regular season at 8-3 overall and 6-2 in the SEC.

Here are the six players that were honored.

Star cornerback, Teez Tabor, is honored for the second year in a row for the First Team All-SEC honors.

Congrats to @_31Flavorz on earning First Team All-SEC honors for the second year in a row! #Gators pic.twitter.com/1EwfoVcbmm

This season, the Gators struggled to throw the ball, but Tabor made sure the opposing quarterbacks experienced the same issues. He joined fellow defensive backs Tre’Davious White of the LSU Tigers, Minkah Fitzpatrick of the Alabama Crimson Tide, and Aarion Penton of the Missouri Tigers. Tabor played in 11 of the 12 games this season, recording 32 tackles, 2.0 tackles for loss, one sack, and four interceptions.

Martez Ivey, offensive linemen, pushed through the pain and gave the Gators everything he had this season. This is why he is the only offensive player on the All- SEC Second Team.  As a sophomore, Ivey is already become one of the most feared and respected offensive linemen in the country. In the SEC Championship Game, Ivey fought through the pain of an ankle injury. Ivey brought his will to win each and every game.

Caleb Brantly, defensive linemen, appeared in all 12 games this season and he stabilized the defense with 28 tackles, 8.5 tackles, 1.5 sacks, three hits on the quarterback, and a forced fumble. Brantly is also one of the heroes of the 16-10 victory over the LSU Tigers, with clutch plays in the defensive red zone and helped Florida clinch the SEC East.

Despite missing three games due to injury, Jarrad Davis, linebacker, secured his place as one of the dominant forces in the country. Davis joined Tim Williams of the Alabama Crimson Tide and Jordan Jones of the Kentucky Wildcats as the linebackers honored on All- SEC Second Team. Teez Tabor calls Jarrad Davis the heart and soul of Florida’s defense. Even missing three games, Davis is still ranked No.2 in total tackles and solo tackles and third in tackles for loss. He finished the season with 60 tackles, 29 solo, 6.0 for loss, 2.0 sacks, and five hits on the quarterback.

Quincy Wilson, defensive back, helped keep the defense together by stepping up and thriving against opponents. This season, Wilson lead the Gators with 31 tackles, 3.5 tackles for loss, one sack, three interceptions, and a hit on the quarterback. Wilson is not only on of the best in the SEC, but in the country.

A punter is one of the most valuable players on the team and Johnny Townsend does a great job. When the Florida Gators lost starting quarterback Luke Del Rio and struggled to find consistency, Townsend dominated  on special teams. Townsend attempted 60 punts for 2, 883 yards, which comes out to an average of 48.1 yards per punt, this is the best average of any punter in the SEC. Townsend also caused 17 fair catches, pinned 25 punts inside of the 20 yard line, and booted 28 different punts upwards of 50 yards.

Here is the full list of the All- SEC Teams

Hello my name is Kaitlin Alexander, a passionate story teller and lover of sports. Fun facts about me: I am a world traveler, interviewed all three UF Heisman Trophy winners, and a former intern of Bleacher Report. Follow me on Twitter: KalexanderUF
@KalexanderUF
Previous Chris Sale Changing Sox
Next Tim Tebow Could Receive Invite to Spring Training