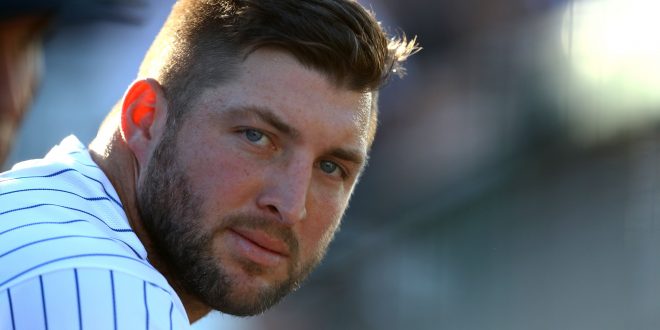 Aspiring major leaguer Tim Tebow received the support of Mets manager Terry Collins and GM Sandy Alderson on Wednesday when the two expressed interest in inviting him to spring training.

In the ongoing MLB Winter Meetings, Alderson was adamant that Tebow receive minor league experience next year so that the organization could continue to evaluate him. Tebow’s journey from a former football player to a potential baseball player began in late August when he held a showcase for teams. The Mets signed him to a minor league contract with a $100,000 bonus. He later played in the Arizona Fall League. The AFL showcases several of each team’s best prospects and is a heavily scouted event.

The former Gator registered 71 plate appearances in the AFL while traveling back and forth from Arizona for baseball and elsewhere for his SEC Network broadcasting position. Pitchers ate him up as he managed a paltry .194/.296/.242 line with no home runs and two RBI. He finished his final week a little stronger though, going 5-for-19 with two doubles. About the only positive scouts conceded was his raw power.

It’s tough for a 29 year old to break into the sport of baseball after not having played for a decade. The Mets know this and they’re looking to make sure Tebow gets many opportunities to hone his new craft. Collins said he wants him in Spring Training with the team in Port Saint Lucie. Traditionally, the current 40-man roster of a team attends spring training. In addition, teams can extend invitations to their top prospects that are close to MLB ready. Tebow wouldn’t fall under either of these categories, but Collins doesn’t care.

Even if Tebow isn't invited to camp, TC says he'll make it a point to bring him over for games in big league spring training.

Tebow playing in the Grapefruit League will once again bring plenty of attention to the Mets. But Collins reminded everyone that they’re a New York team — they’re used to it. But Alderson wants to make sure he’s not treated like a “circus animal”.

Alderson points to Collins’ willingness to invite Tebow to camp as a sign of the player’s positive influence. The general manager isn’t oblivious to how poor he performed in the AFL, but he says they expected him to struggle.

The Mets begin spring training games on Feb.24 with the first full workout on Feb.18.