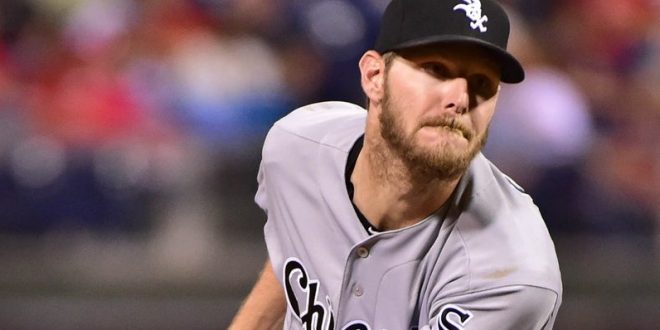 Over the summer, the Golden State Warriors went from being a powerhouse team with three of the top players in the league, to a team many didn’t think would be beat after adding Kevin Durant. This sounds a little familiar with the MLB and the Boston Red Sox. After making the playoffs this year with players such as Dustin Pedroia, David Ortiz, Rick Porcello, David Price, Hanley Ramirez and many more, the acquisition of all-star pitcher, Chris Sale, could be why many believe the Red Sox to be the Warriors of baseball now.

Does Chris Sale's addition to the Red Sox make them a "super team?" pic.twitter.com/PkBZl3z1dC

Who is part of the trade?

Sale, an all-star for the past five years, is walking into one of the best pitching rotations in baseball. The six foot, six inch lefty will join the most recent Cy Young winner, Rick Porcello, and past winner David Price.  Red Sox president of baseball operations, Dave Dombroski, is known to be pretty aggressive when it comes to trades in the baseball industry and he made a pretty aggressive move in the winter meetings.

The trade package gives the Boston Red Sox, Sale, but in return, they handed over key prospects, Yoan Moncanda and Michael Kopech. These guys are two of the best prospects in the MLB and are very young guys who could have a serious impact for the Chicago White Sox organization. The Red Sox brought Moncanda in from Cuba on a record $31.5 million deal. He had a pretty average debut season, going four for nineteen with twelve strikeouts. Kopech really impressed scouts in the Arizona Fall league with an extremely hard to hit fastball. He posted a 2.25 ERA with the Red Sox in eleven starts.

Why Boston went for Sale?

The Red Sox needed that top of the rotation starter and they sure got him. They have been on the move as they have made key transactions in the last year acquiring Craig Kimbrell and signing David Price last off season. The Sox thought that getting these players would help push them through the 2016 postseason, yet they couldn’t get anything going. Aside from Rick Porcello’s unbelievable season and the fact that they managed to finish with a pretty good ERA from the starting pitching rotation without Sale, the Red Sox needed that go to guy.

One of the main reasons for the signing of Sale, is to get past that stump in October. Dombroski said that this decision came down to their belief in his ability to allow them to win and given that last year they couldn’t win in the postseason, he believes that Sale will give them the best chance to do that and not just for a one year type of deal.

Sale had a stellar year last year setting a career high with 226 2/3 innings and 233 strikeouts (5th). He has struck out 28 percent of the batters he has face in the last five years, putting him at the fourth highest rate in the majors.

Since 2012, Sale ranks first in strikeouts, walks plus hits per inning pitched, and in his ERA while Price is follows him in strikeouts and walks plus hits per inning pitched and has the third best ERA. Sale is 74-50 in seven seasons with Chicago with a 3.00 ERA and 1,244 strikeouts. Not only is Sale a great player, he has a great past playing against the AL East. In his career, he is 14-8 with an ERA of 2.53 in 25 starts against AL east teams not including the Red Sox. A lot of that success comes from last season when he went 6-0 with a 1.55 ERA against AL East teams.

Why did the White Sox get rid of him?

Sale gave the White Sox a good seven years and it was time for them to start rebuilding their franchise. But this past year, Sale’s relationship with the White Sox went down hill. He was suspended five days without pay after he cut up all the 1976 White Sox collared jersey’s the day of the game, claiming they were “uncomfortable.” Also, before the season started last year, Sale was very vocal about the amount of time Adam LaRoche could have his son in the clubhouse which was a main reason for LaRoche’s retirement. This also put him and the White Sox on bad terms.