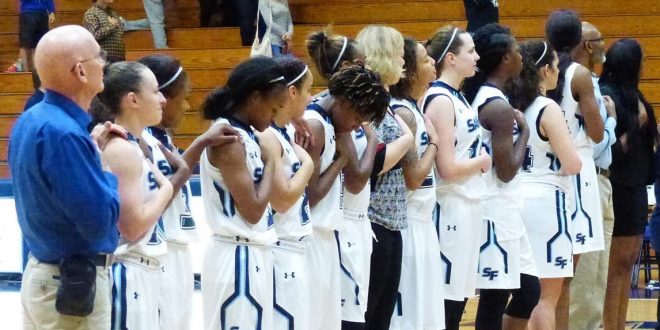 FEATURE: Despite Shaky Start, One Santa Fe Student is Just Happy to Be Playing Basketball

The web that brings athletes together to their college team is always different. Did you know that the Santa Fe College women’s basketball team has three international players on its 12 man roster, including one beginner to the game Tabitha Odabe. The path Odabe took to get to where she is now was a little more unorthodox than others.

Getting to Santa Fe 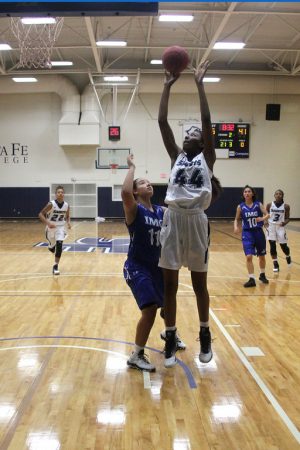 Born and raised in Abuje. Nigeria, Odabe did not begin playing basketball until her junior year of high school. Like any high school junior, she was going to soon begin planning for college. In fact, she said that if she had not began playing basketball she would probably be married by now. It is typical for girls to marry young and she said things would have been no different for her.

But instead, an unexpected encounter with a stranger pushed her to give basketball a try. A woman approached Odabe one day and told her that God would be upset with her if she did not use her height to play basketball. She had always seen other kids playing on the courts but she had never thought about playing the sport.

Oh, and did I mention that she stands at a towering six-feet-five-inches? Which in America is a dominate height for a female basketball player. But for Odabe, and others in her country, playing sports were not a primary activity. Odabe said that at her school there was not a team for her to be apart of because school came first.

Odabe lost her father at a young age, so growing up in a home with a single mother and three other siblings, success was the expectation. She is currently studying to obtain an Associates Degree at Santa Fe College. She said she hopes to become a nurse. Although after taking an International Relations Course, she may consider changing her major to Political Science.

The Saints began their season off on the right foot, winning their first two games. However, things quickly turned when the team lost their next two games. More recently, the team played on Saturday, December 3rd in a rematch against Tallahassee Community College Eagles. The Saints beat the Eagles in a close 85-83 win. The Eagles came out aggressive and with a chip on their shoulders to beat the Saints 87-52.

In the rematch Odabe played for almost 18 minutes, scored six points and grabbed 13 boards. Although the end result was not desired, she is improving her overall statistics. Odabe has started in all 10 games and is averaging, 8.9 points, 10.5 blocks, and 1.9 rebounds a game.

The Saints currently have a 4-6 record and will play again on Wednesday December 14, at 6 p.m. against the Eastern Florida State College Titans