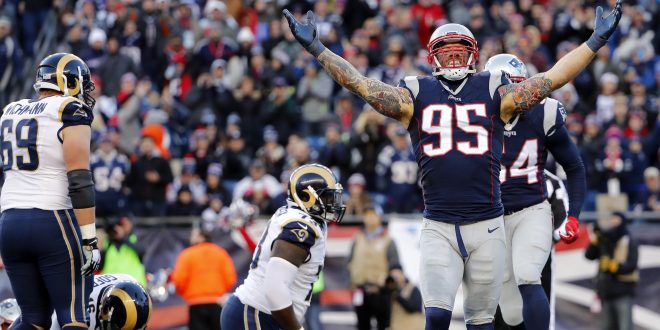 It’s Monday night and that can only mean one thing… Monday Night Football.

The Baltimore Ravens (7-5) will head north on I-95 to Foxborough to face off against the New England Patriots (10-2).  Both teams are 4-1 in their last four starts.

The Patriots’ season has been full of drama.  First, the Pats started off the season without star quarterback Tom Brady (thanks to his “Deflategate” suspension), along with backup quarterback Jimmy Garoppolo’s injury that sidelined him as well.  Just when head coach Bill Belichick thought his team’s karma couldn’t get any worse, it did.  The larger-than-life tight end, Rob Gronkowski, suffered a back injury that would leave him out for the rest of the season.  Despite all of that diversity thrown their way, the Patriots still managed to win their last three games, even after their loss to Seattle four weeks

ago.  They lead the AFC East Division and AFC Conference in the standings.

Belichick’s comes into the game with a solid offense and defense.  The Ravens’ defense may pose a threat for the Pats, but the Pats have a strong offense to fight back.  The Patriots have Tom Brady who is more than capable of fighting off the Ravens’ defense.  The Patriots’ offense will have to play well to beat the Ravens, but their somewhat average defense still has a chance to stop Flacco’s offense.

Tom Brady is looking for his 202 career win tonight, but knows it won’t be easy.  Here’s what he had to say about the Ravens.

The Ravens are still in position to make a playoff run this season.  They are currently in the second spot in the AFC North division.  They started off the season hot with three straight wins, but soon after 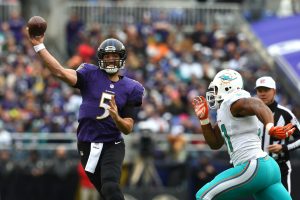 dropped the next four.  Since then, the Ravens have only lost to the Dallas Cowboys (11-2) in the last half of the season.

As stated earlier, the Ravens’ defense has been strong this season.  They are good stopping the ground game, but also prove to be powerful against the passing game as well. As for the Ravens’ offense, quarterback Joe Flacco isn’t playing like the Flacco who won the Superbowl in 2012 with this team.  He averages just over 6.5 yards per pass.

You can find radio coverage on ESPN Gainesville 98.1 FM beginning at 7:45 p.m.  For television coverage, tune in to ESPN.