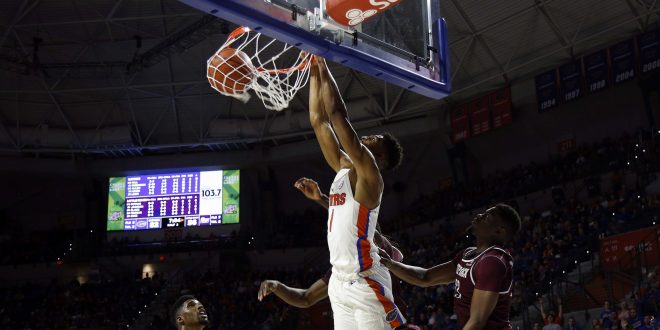 On Tuesday night, for the second time this season, the Florida men’s basketball team will play at their updated home, the Exactech Arena at the O’Connell Center. This time, it’s not Arkansas Little-Rock, but their first SEC opponent in the Ole Miss Rebels. The Gators were 2-0 against the Rebels last season, winning games in both Gainesville and Oxford. Tuesday night’s matchup tips off at 7 p.m.

Rebounding Rebels, the beasts of the boards

Sebastian Saiz, one of only two senior forwards on the Rebels, is third in the nation in rebounding, averaging 12.2 boards per contest. Saiz is currently averaging a double-double, adding 15.8 points per game, shooting 52.3% from the field. The upperclassman is no stranger to the Gators and has played in every single Ole Miss-Florida game since his freshman year.

The Rebels second biggest threat on the boards is sophomore Terence Davis, a home-grown prospect from Southaven, MS. He’s averaging 12.3 points, 5.5 rebounds and 1.2 steals per game. While Davis had a mediocre game in the team’s most recent loss to No. 8 Kentucky, putting up sevenpoints and five rebounds, his counterpart Saiz finished with a double-double, scoring 23 points and grabbing 13 rebounds.

Despite leading Ole Miss in scoring, Stefan Moody was not drafted to the NBA and is now overseas playing for Trabzonspor B.K. in Turkey. Many Gator fans remember Stefan Moody from his game winning three-pointer during the 2014-2015 season vs. Florida and his ability to shoot from anywhere past the half-court line.

Taking over for Moody, in terms of a true volume scorer, is Deandre Burnett, who transferred to Ole Miss from the University of Miami after the 2014-2015 season. Burnett sat out last season, due to NCAA rules and restrictions, but now leads the Rebels in scoring with 19.2 points per game. Burnett scored 19 points in the team’s last game vs. Kentucky, and has scored at least 19 points in three out of Ole Miss’ last four games.

Because they switch so much on defense, many different players on the Gators will have the honor of guarding Burnett, who like Moody, can shoot it from just about anywhere on the floor.

Florida Gator head coach Mike White is a well-known name around Ole Miss after spending four years at the school, playing point guard for the Rebels. White has the sixth-most assists in Ole Miss history and even returned as an assistant coach for Mississippi from 2004-2011.

Mike White’s strategy of being the best conditioned team in the nation has paid dividends. Florida’s only losses this season have all come against ranked teams and all have been on the road. The Gators closed out their SEC opener against the Arkansas Razorbacks strong, winning 81-72. KeVaughn Allen and Devin Robinson were crucial in the victory combining for 38 of the Gators’ 81 points. Allen was 5-9 from downtown, but the rest of the team was 4-17.

Florida did grab an impressive 16 offensive rebounds, and will need another strong contest on the offensive glass to put themselves in the best possible position vs. Ole Miss.

Tuesday night’s game starts at 7 p.m. and can be seen on ESPNU with Mike Morgan and Jon Sundvold on the call. You can listen to the game as always on the Gator IMG Sports Network with Mick Hubert and Bill Koss. The Gators’ home, SEC opener is also 90’s night, so deck out in your best jean jacket and parachute pants if you plan to attend the game.