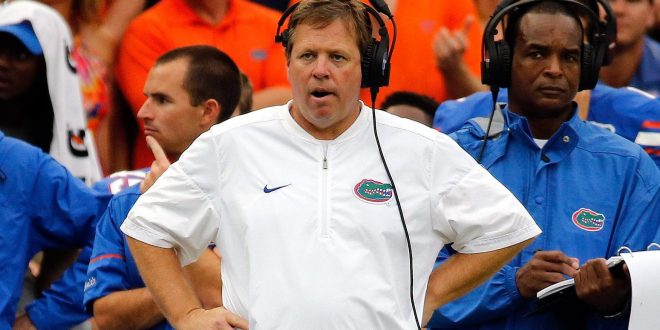 TAMPA, Fla.—On Monday afternoon, the Florida football team put an exclamation point to the end of its season after defeating Iowa in the Outback Bowl. At the end of regulation, the scoreboard showed Florida-30 Iowa-3. This 27 point win margin marked a new program record for Florida—fewest points allowed in a bowl game.

There’s no question that the Gators dug themselves out of an offensive hole, after quarterback Austin Appleby threw two

But would things have turned around for Florida’s offense if the defense didn’t make that fourth down goal line stand against (“LSU”) Iowa’s offense early in the game?

The momentum completely changed from that point on.

The Gator defense was coached by Geoff Collins until he accepted a head coach position at Temple in December. Collins was Jim McElwain’s first assistant coach hire when he took over at Florida back in December 2014, so it’s safe to say Collins helped shape this defense.

However, with Collins moving on—the Gator defense must go on.

Along with the goal line stand, the Orange and Blue held the Black and Gold’s rushing game to 171 yards and their 1000-yard rushers LeShun Daniels Jr. and Akrum Wadley from scoring—Iowa’s only points came from a field goal.

The injury list for Florida has been full all season long and filled with key defensive players like linebackers Jarrad Davis and Alex Anzalone, safety Marcus Maye, and defensive end Bryan Cox Jr.—Monday’s Outback Bowl was no different for the Gator injury list.

No problem—Florida got it done with young guys.

Freshman linebacker Vosean Joseph had a career-high seven tackles against the Hawkeyes.

interceptions in the fourth quarter. Gardner’s first interception was a pick-six, after taking it 58-yards to the end zone and the second one nearly reached the end zone again. With two nice grabs like those, the freshman also grabbed the Most Valuable Player Award.

“I loved my first season. I love being apart of the Gator program. I learned a lot from older guys like Jalen Tabor, Marcus Maye, Joey Ivie. I learned more from the defensive linemen because without the D-linemen…anything could happen,”—Gardner said about his first season.

Florida’s mentality all season long has been “Next Man Up.” Junior safety Marcell Harris stepping in for Marcus Maye was a key player on that goal line stand.

Geoff Collins is now a head coach at Temple. So, his shoes need to be filled and it’s “Next Man Up.” Randy Shannon, who usually coaches from the sideline, called defensive plays from the press box as interim defensive coordinator.

After the defense’s performance, did Shannon earn the right to be Florida’s next defensive coordinator?

A senior at the University of Florida reporting on Gator sports, local Gainesville and surrounding area sports, and telling the stories of local athletes. Born and raised in Gainesville, Florida with a passion for telling people's stories and having fun doing it.
@SportsDarwinism
Previous Florida Men’s Basketball Ready for First Home SEC Test vs. Ole Miss
Next Florida Steamrolls Iowa, Ends Season on High Note

Michigan will be facing Iowa in the Big Ten Championship Game on Saturday in Indianapolis. …