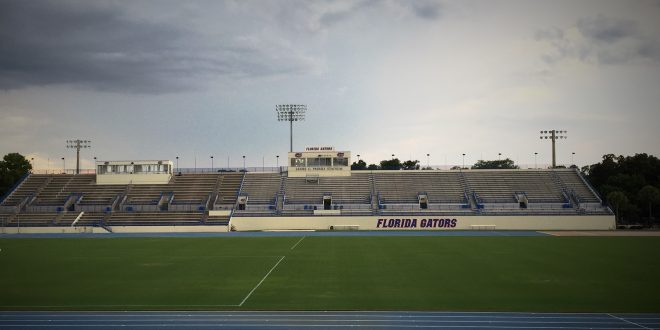 FEATURE: Florida’s Most Dominant Program is Ready for the Upcoming Season

Head coach of the Florida men’s and women’s track and field team, Michael Holloway, is entering his 15th season as head coach. The last ten has seen him as the head man of both the men’s and women’s teams. Over that span, the Gators have six national championships, nine SEC championships, and 413 USTFCCCA (US Track & Field and Cross Country Coaches Association) All-Americans. This unprecedented success has landed Holloway into the USTFCCCA Hall of Fame.

Holloway discusses his view on the program’s legacy.

This past year, Holloway snagged a third men’s outdoor national championship—all of which have come in the last five years. Playing at a championship level has become the standard for athletes on the team like senior distance runner Ryan Schnulle. However, consistently staying at the top is never an easy feat. If any team could do it, then a dynasty would not be that big of a deal. For Schnulle, being mentally strong is the key to handling the pressure of being a top dog.

Women’s team still looking for their own title

Although the women don’t have their own team title, they have come very close. Since Holloway took over in 2007, the women’s team has finished in the top four at the NCAA Championships five times. According to senior sprinter Kyra Jefferson, 2017 might be their year.

Jefferson has stepped up over the course of her collegiate career as one of the leaders of the team. In addition, she is one of the most decorated female sprinters of all-time. By having a sub- 11.2/100 meter, 12.25/200 meter, and 51.50/400 meter, she became the first female collegiate sprinter to ever hit all three marks. All of that success has come despite numerous injuries.

One part of the team that Jefferson praised was the incoming freshman. Among the talented freshman, Timetria Mitchell and Brandee’ Johnson bring a bevy of accomplishments. Mitchell is a hurdler from Miami Northwestern High School. From 2014-2016, she was the Class 3A 100 meter-hurdle outdoor champion.

For Johnson, she’s the most decorated incoming freshman for the women’s team. Johnson’s senior year of high school saw her become a seven-time indoor and outdoor champion in her home state of Virginia. She has also gone on to compete in tournaments like the IAAF World Youth Championships, New Balance Nationals, and USATF Outdoor Junior Championships.

With the talent coming in, don’t expect the team to not only compete for a title this year, but for years to come.

The Jekyll and Hyde dilemma with college sports

Not only does the team stay performing at a high level, but they deliver year in and year out. The trophy collection is impressive, but the consistency of the team is historic. The men’s team has finished in the top-three in the last eight outdoor national championships. That streak is the fourth-longest in NCAA history.

From what people tell Holloway, he would at least have a trophy for him on campus by now if he coached football or basketball. The University of Florida has arguably the best athletic program in the country. With 19 sports, the Gators boast success in each sport. It’s unfortunate that the shadow of a handful of sports covers up the incredible successes of over a dozen others.

When you’re a dynasty, the expectations will only be met with more trophies. This upcoming calendar year will be no different for the track and field teams. Schnulle sees the Gators competing at the SEC and NCAA championships once again. Holloway just promised that he “would try” to snatch another title. If Holloway’s resume is any indication of his effort, the Gator community will have to make some more room in the trophy cases.

The Gators first meet takes place on January 7, 2017, at Clemson. If you were interested in watching the teams at home, there will be two opportunities to do so. On March 30, the Pepsi Florida Relays will take place; and then on April 28, the Tom Jones Memorial will take place on campus as well.

For more updates and coverage of the Gators track and field teams, stay locked in on ESPN Gainesville.