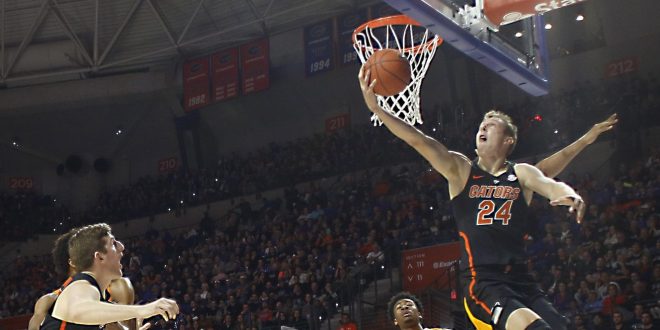 Florida’s win streak of 11 straight wins over Alabama was snapped last season. On that night,  the Gators shot just 28.6% from the field and 14.3% from beyond the arc. That loss at the O’Connell Center came mid-way through the SEC schedule last year, and was the start of a 3-6 in-conference skid, which would eventually all but seal the deal on a trip to the NIT. This season, the matchup comes early in SEC play. Despite the hiccup last year, it will feature the Gators looking for their 12th straight win against the Tide in 13 years. A win that would give UF their first 4-0 start to Southeastern Conference play since the 2013-2014 season.

The first thing you notice when you look at Alabama statistically is their ability to shut teams down on defense. Consistently, their lockdown coverage forces offenses to take bad shots. The Crimson Tide rank 13th in the nation in points per game allowed at 61.1, 38th in field-goal percentage defense at 39.5%, 39th in fewest fouls per game and 34th in rebound margin at +6.4. ‘Bama has won four straight games, holding their opponent to 60 points or less in every single contest. In their 9 wins this season, they’ve given up an average of only 55.8 points per game.

I don’t think we can go into this ‘Bama game on the road overthinking and being tentative and being overly concerned with their changing defenses, which they do a very good job of,” said Coach Mike White on Monday. “Like Ole Miss, we’re going to see different looks and they keep you off balance with giving you some pretty unique looks as compared to the rest of our league defensively. But being very, very aggressive is probably key No. 1 offensively for us. They’re just two-point percentage defense is terrific. Their block percentage is terrific. They turn you over. From the tip, we’ll be looking to be as aggressive as we possibly can be. If we have an open look, we have to shoot it with confidence.”

White also highlighted Jimmie Taylor and Donta Hall, who average 1.7 and 1.6 blocks per game respectively for Alabama, which ranks 10th and 12th in the SEC.

“Both of those guys are improved offensively, but they change the game defensively for those guys,” said Coach White. “I really think (Jimmie) Taylor and (Donta) Hall allow them to be really unique defensively. They clean up so many mistakes and they anchor their defense. They’re very, very imposing at the rim.”

Alabama’s offensive look is unique in the sense that no one player stands out above the rest. Five different players on the Crimson Tide average between 7.4 and 9.9 points per game in Dazon Ingram (9.9), Braxton Key (9.4), Corban Collins (7.5), Riley Norris (7.4) and Avery Johnson Jr. (7.4), who is named after his father, Alabama head coach Avery Johnson. In their last game, Alabama only scored 59 points in a 59-56 win over Vanderbilt in Tuscaloosa, with Ar’Mond Davis leading the way, scoring only 12 points.

“We have to be really locked into their actions and to the scouting report in terms of personnel, they’re all a little bit different,” said Mike White.

As of January 9, 2017 at 3:15 p.m., Florida is ranked 3rd in overall RPI, 1st in total strength-of-schedule, 15th in defensive efficiency and 25th in offensive efficiency. The Gators are now ranked #23 in the latest AP Poll, 14th in the newest KenPom poll and 5th in Joe Lunardi’s most recent Bracketology, which did not take into account Florida’s win over Tennessee on Saturday evening.

KeVaughn Allen has become the most volatile, aggressive scorer the Gators have had since Bradley Beal back in 2012. Allen is leading Florida in points per game with 14.7 and is shooting 42.7% from three-point range. As of lately, his numbers have been even better. KeVaughn has averaged 19.3 points per game and shot 62.1% from downtown in his last four games. He was even named SEC Player of the Week on Monday morning.

He doesn’t understand sometimes how good a scorer he is. But I think he understands it more than a year ago. And I think his teammates have done a really good job with him, too, urging him to be aggressive and to be the guy that looks for his shot as much as anyone on our team, looking for him and getting him the basketball,” said Coach White. “He’s really playing well as of late and we certainly hope that continues. He’s a great young man and he’s a pleasure to coach every day.”

While Allen’s scoring surge has been important in many of Florida’s latest wins, Coach Mike White still feels there’s room for the offense to improve.

We’ve been really good in transition of course, especially lately. Been shooting the ball better as we talked about earlier, we’ve been really good on the offensive glass, I like our decision making, our assist to turnover ratio are all pretty good. Scoring in the halfcourt is an issue and then defensively our numbers have gotten better with defensive rebounding, our blockout percentages are increasing, there’s been much more of an attention to detail there,” said White. “Carryover from practice has been really good. I was really pleased while watching the film against Tennessee with the level of hitting, of what we call hit and go, and we laid bodies on bodies and defended the paint really well, but that’s one game and we’ve got to do that more consistently. So, probably the two biggest factors right there are one offense and two defense moving forward.

A balanced gameplan has a lot to do with Florida’s 12-3 start to the season. The Gators rank in the top 100 in both points per game (78.9/75th) and points per game allowed (66.5/71st). UF plays their best basketball when their high pressure defense turns into transition opportunities on offense, diminishing the role of the halfcourt.

Tuesday night’s game tips off at 9 p.m. at Coleman Coliseum in Tuscaloosa and can be seen on ESPNU. If you can’t watch the game, you can listen on the Gator IMG Sports Network. 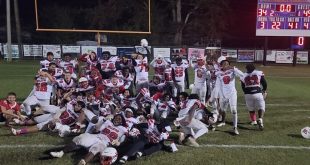