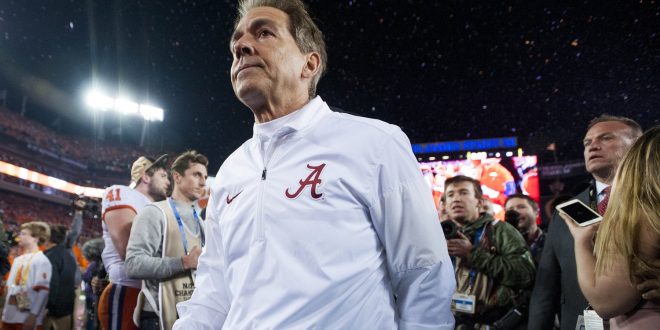 With 2:07 left in the 2017 National Championship game, Jalen Hurts ran in a 30-yard score to put the Alabama Crimson Tide up by three points. ESPN’s win probability calculator gave them a 78.1% chance to win at the time and if things continued the way they did all season, ‘Bama’s defense would hold Clemson to seal the victory. Little did the computers know that Deshaun Watson would engineer a 9-play, 68-yard drive with one second to spare on the game clock. It culminated with a controversial pick-play opening up Hunter Renfrow for 2-yard touchdown pass to win the first national championship for Clemson since 1981.

Head coach Nick Saban and Dabo Swinney shook hands at mid-field following the game, ceremoniously ending the dogfight between the two college football powerhouses. Swinney ran off the field to the Clemson locker room, elated with joy to celebrate a national championship. Saban walked back somberly to a group of young men filled with tears and anger. Saban had the night to think about the future of Alabama football. Despite the loss, it is bright. The Crimson Tide is the odds on favorite at 13/4 to win the national championship, per VegasInsiders.

‘Bama will not deprived of talent next year. Saban has another stud-filled recruiting class coming in. The Tide feature the No.1 class of 2017 with 26 players at least verbally committed to play for Alabama. Among them are three five-stars, 19 four-stars and three three-star recruits. Three of the top nine players in the class of 2017 are committed to UA including Najee Harris, the top running back in the nation, Dylan Moses, the best athlete in the country and Alex Leatherwood, the third-best offensive tackle in the nation. Out of the ESPN Junior College 50, Alabama has also garnered commitments from three of the top seven players. They include Elliot Baker, the top junior college offensive lineman, Isaiah Buggs, the top junior college defensive end and Jhavonte Dean, junior college’s second best cornerback.

Next season, the team is expecting to bring back seven offensive starters, six defensive starters and one special teams starter. For a team that has made the national championship game five out of the last eight years, that’s pretty good. Key losses on the team include TE O.J. Howard, DE Jonathan Allen, LB Reuben Foster and safety Eddie Jackson. The good news for ‘Bama is that the sit-and-wait your turn mentality has produced former top members of the 2014, 2015 and 2016 class as key backups in previous seasons and vital starters in the upcoming 2017 season.

Jalen Hurts is returning for his sophomore season and will have an entire season’s worth of quality wins under his belt to start the year. Even if the Tide don’t want to bank on Hurts as their starter next season, they have two different four-star quarterbacks coming in via their new recruiting class. They’ll join three separate underclassmen that will be able to compete for the starting job. At running back, both Damien Harris, the team’s leading rusher, and Bo Scarbrough, the tailback who took most of the carries towards the end of the season, return next year.

Clemson-Bama II was even better than the original, but where does it rank among the best title games of all time?https://t.co/vlK5uGEDNc

Alabama’s schedule next year features these match-ups in chronological order:

Minus a neutral site game in Atlanta vs. the loaded 2017 FSU Seminoles and the annual Iron Bowl vs. the Auburn Tigers, ‘Bama should be the favorite coming into every other game. 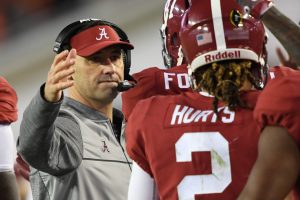 With Lane Kiffin ousted, Steve Sarkisian took over as the team’s offensive coordinator for the national championship game. He should return barring anything drastic. Mick Locksely, the team’s offensive analyst, has been rumored to be in the running for a job at the University of Florida. O-line coach Mario Cristobal has also been linked to Oregon for the same position. But if the Tide move forward with a near identical coaching staff, their recruiting push should remain dominant.

The 2017-2018 season will be Nick Saban’s 11th year at the University of Alabama. He’s the longest tenured Alabama coach since the legendary Bear Bryant’s 25-year run. It will be a year of revenge for Alabama, with nothing short of a championship appeasing ‘Bama fans.

Alabama: 1st loss under Nick Saban after entering the 4th quarter with a double-digit lead: pic.twitter.com/sm1wI3p2R9

Previous Is Alabama On A Roll To Shock No.23 Florida?
Next Clemson Basks in Glory After “Destined” Win