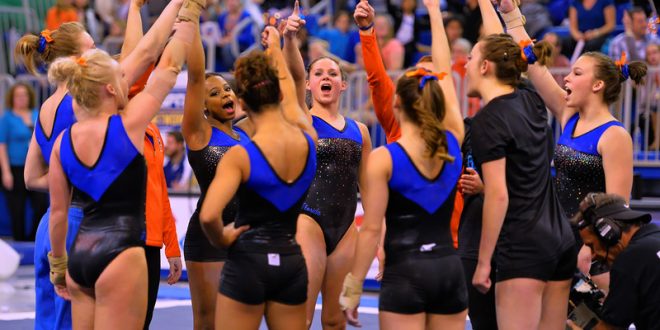 "The Florida Gators gather together before the start of the meet against Georgia. Florida Gators Gymnastics vs Georgia Bulldogs. January 30th, 2015. Gator Country photo by David Bowie."

GAINESVILLE, FL – The Florida Gators will make their first appearance in the newly renovated O’Connel Center this Friday night. It will be the first home meet of the season and also the first SEC matchup. The Gators will be taking on SEC East rivals Kentucky Wildcats at 6:45.  Due to Kentucky’s team colors of blue and white, all Gator fans have been advised to deck out in their best orange attire for this meet! Junior captain Alex McMurtry says her team cannot be more excited to get back into the O’Connel Center.

Florida is coming off a season opening victory over North Carolina State last weekend and is looking to move that winning momentum forward. In last weekend’s win, sophomore Alicia Boren was a huge reason for the Gators win. She scored a 9.95 on vault, the highest score of the meet. Earlier this week, Alicia gave some advice to the new freshman on the team, saying she was just in their shoes and knows just how excited they are.

The Kentucky Wildcats opened their season with a win at Eastern Michigan last weekend. Newest wildcat freshman Mollie Korth opened up her collegiate career winning the all-around title, someone the Gators will definitely have to look out for. Kentucky is currently rated 14th in the most updated Road to Nationals rankings. Florida is currently third in these rankings. Freshman standout Amelia Hundley says starting the season with a win will push them forward into this week.