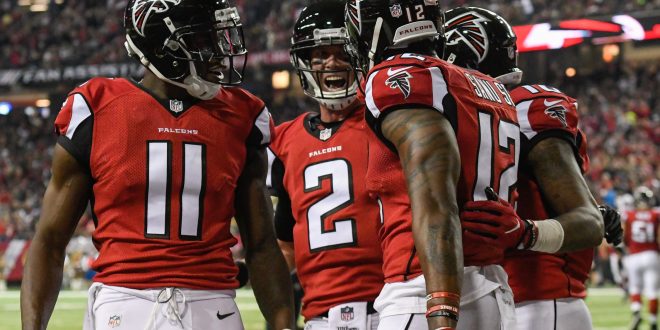 Atlanta Falcons in the Playoffs

After missing the playoffs his first year, Dan Quinn and his Atlanta Falcons made major improvements this past season to win the NFC South division with an 11-5 record. As a reward for there postseason birth the Falcons host the Seattle Seahawks this Saturday. Back in Week 6 of the regular season, the Falcons lost to the Seattle Seahawks in a cliffhanger 26-24 thanks to a Steven Hauschka 44 yard field goal. During the Falcons final drive Matt Ryan was incomplete on his last four throws, including a breakup by Seattle cornerback Richard Sherman on a long pass to Julio Jones on which the Falcons screamed for a pass interference flag. The Falcons and their high powered offense will be looking for revenge this Saturday.

Speaking of high powered offense, the maestro of the Falcons league leading 33.8 ppg is MVP candidate quarterback Matt Ryan. Ryan lead all quarterbacks in the regular season with a 117.1 quarterback rating. Matty Ice was second in the league with 4,944 passing yards, 38 passing touchdowns and third in passing percentage with 69.9%.

Matt Ryan on the Seahawks:

Matt Ryan orchestrates the offense but it helps to have one of the most dynamic wide receivers in the game with Julio Jones.  Julio lead the Falcons in receiving with 83 catches 1,448 yards and 6 touchdowns receptions. In addition the Falcons have a two headed monster in running backs Devonta Freeman and Tevin Coleman which combined for 1,599 rushing yards and 19 rushing touchdowns.

Julio Jones on the Seahawks:

To complement the Atlanta Falcons offense the defense of the has been a key instrument in there success this season as well. The Falcons defense is lead by the freakishly athletic outside linebacker Vic Beasley who was first in sacks this season with 15.5. All facets of the game offense, defense and special teams will be key assets in the Falcons battle against the legion of boom.

The Falcons square off against the Seahawks at 4:25 PM on Saturday.

Previous No. 23 Florida and Georgia Meet for the 144th Time Saturday Afternoon
Next Houston Looking For an Upset in Foxborough