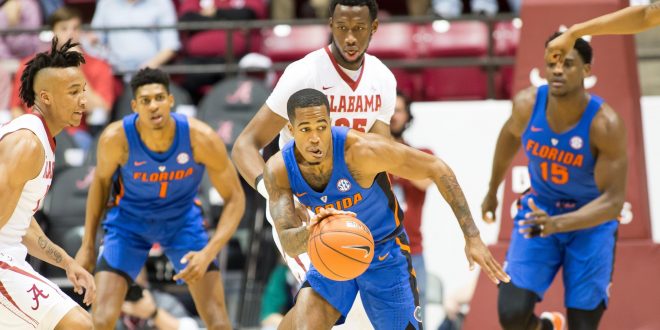 No. 23 Florida and Georgia Meet for the 144th Time Saturday Afternoon

No foe is more common to Florida Gator basketball fans than the team from Athens. The Georgia Bulldogs and Florida Gators will square off on Saturday afternoon at noon in their 144th meeting. The first time these two teams met was in the winter of 1950. In that game, the Gators took down the ‘Dawgs, 54-49, in their first season at the brand new Florida Gymnasium. 67 years later, the two teams meet in the renovated Exactech Arena at the O’Connell Center, with the rivalry still as alive as ever.

The computers are a big fan of each of these teams. Per KenPom, The Gators rank 14th in defensive efficiency, while the Bulldogs sit at 22nd. Both teams are allowing 67.1 points or fewer per game and have won their past two match-ups. On the offensive side of the ball, Florida surpasses Georgia in terms of ability, and rank 22nd in offensive efficiency, while UGA comes in at a low 114th. UF scores the fourth most points of any team in the SEC, whereas the ‘Dawgs rank fifth to last.

While basketball has become a game of individuality in recent years, nearly half of Georgia’s points per game come from two players. Yante Maten is nearly averaging a double-double with 19.9 points and 8.6 assists per game. His ability to score is unquestioned, shooting 54.2 percent from the floor and 43.3 percent from downtown. Maten has been at UGA for three seasons now, and along with J.J. Frazier, is one of only two players averaging 30 minutes per game or more. Maten has had two double-doubles in the past three games and is averaging 20.3 points per game in the same span. Coach Mike White noted how Yaten isn’t too flashy, but gets productive in a hurry.

The other component of the Bulldogs’ two-headed monster is J.J. Frazier, a 5’10”, 155-pound uber-athletic guard averaging 16.1 points per game. Frazier is similar to Kasey Hill in terms of sheer explosiveness and ability to get to the basket. Also like Hill, Frazier is a senior who has consistently improved his play throughout his long tenure. He’s averaging 19.6 points in his last five games and has notched at least five steals in two of his past four games.

Bulldogs on the Boards

Aside from Frazier and Maten, Georgia’s best team asset is their ability to rebound, more specifically on the defensive side of the ball. The ‘Dawgs are averaging 39.6 rebounds per game, which ranks 44th in the nation, and are number one in the SEC in defensive rebounding, grabbing 28.9 boards on defense per game. Unlike UGA, UF has struggled mightily on the boards compared to last season.  The Gators rank dead last in rebounding in the SEC, notching only 35.4 boards per contest.

Kasey Hill, a true senior, and Canyon Barry, a graduate transfer, have helped pave the way for success in recent games. The pair make up two of the four seniors on the roster and have made great strides since the start of the season. Canyon Barry, coming off the bench, has scored at least 13 points in five of his past six games. Kasey Hill, on the other hand, has been Mr. Everything for the Florida Gators, averaging 9.4 points, 4.9 assists, 3.1 rebounds and 1.9 steals per game. Hill has had at least five steals, five rebounds and four assists in two of his past three games. Coach White discussed Hill’s senior urgency and Barry’s development over the course of the season.

The Gators Can Shoot?

In stark contrast to last season, Florida is shooting 35.4 percent from downtown, a 3.5 percent increase from past season thus far. While that change might not seem massive overall, the Gators attempt more three-pointers than half of the league, so the improvement is easily identifiable in the box score. Georgia, on the other hand, is second worst three point shooting team, trailing only Missouri. Their 31 percent hit rate from beyond the arc might offer Florida another chance to showcase their 1-3-1 zone, which was effective in closing out their most recent game against Alabama. Coach White talked about potentially using that zone against UGA.

If you’ve watched Gator basketball recently, it may look more like a run-and-gun pickup game at the local YMCA than SEC basketball. Luckily for Coach White, Florida has more often than not been on the successful side of the turnover battle. While the Gators turn over the ball 11.3 times per game, which ranks t-25th in the country, they force 16.6 turnovers per game, which ranks 19th in the nation. To round out these two numbers, Florida ranks 8th in the NCAA in turnover margin, coming in at +5.4. With the athletic personnel, the Gators feature night in and night out, their ability to run up and down the court benefits them greatly.

In Joe Lunardi’s newest Bracketology, released January 12, Florida is now a No. 4 seed with a match-up against ETSU in Orlando. The Gators rank third in RPI and the AP Poll slotted them at No. 23 in the latest showing. UF is 8-3 against the RPI Top 100 and rank second in SOS. Georgia is currently listed as one of Lunardi’s “Next 4 Out”.

Georgia-Florida tips off at noon from Exactech Arena at the O’Connell Center and can be seen on ESPN2. If you can’t watch the game, you can listen on the Gator IMG Sports Network.

Previous Gator Women’s Basketball Falls to No.4 Mississippi State
Next Atlanta Falcons in the Playoffs