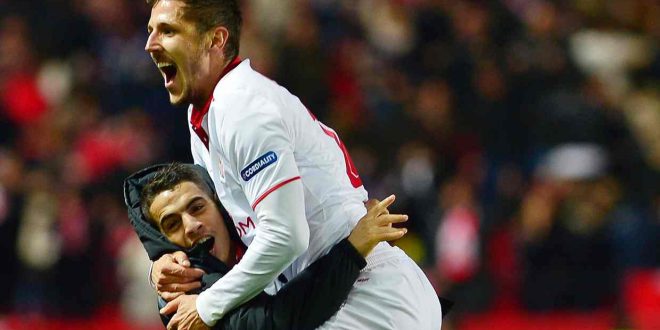 After succeeding in a tough Copa del Rey two-game leg against Athletic Bilbao, FC Barcelona was back in the Camp Nou to face UD Las Palmas to put some early pressure on the league leaders, Real Madrid. On the other side, Las Palmas would tried to keep their hopes alive of getting into European-competition places in the table.

Barcelona made some rotations in their lineups knowing that they will face Real Sociedad in Copa del Rey on Thursday. Aleix Vidal had the chance to play as a right-back; André Gomes and Rafinha were the interiors; Arda Turan played in replacement of Neymar.

The game started like most of the many others played by Barcelona at Camp Nou: they had the possession of the ball and pushed Las Palmas back inside their box. This helped both Rafinha and Gomes to be a threat for Las Palmas defenders throughout the entire game. They took advantage of the open gaps left by the defenders who were busy doing man-to-man marking on Lionel Messi, Luis Suárez, Vidal and Turan. In fact, those constant movements were the ones that allowed the hosts to score the first goal of the game.

Vidal advanced lines and alternated his position while working as a wide midfielder. That allowed Barcelona to have a positional advantage over their adversaries in the midfield area. Vidal sent a through pass to the space between Hélder Lopes and Tana. Gomes made the cut between them to receive the ball and send the short center to Suárez who scored the first goal with a one-touch shot in the 13th minute.

Las Palmas and their constant positional switching in the attacking and defensive transitions forced Barcelona to exploit the wings throughout the entire game. Roque Mesa was pivotal in this strategy. On defense, he backed up the defenders as a third center defender. Barcelona struggled to find the key for more goals through the inside thanks to that overpopulation of players.

One of the keys for Barcelona to give rhythm to the ball movement was Sergio Busquets. He did an exceptional job while working under the pressure of the man-to-man marking by Jonathan Viera. Busquets’ one-touch passes in the first half gave enough space for Rafinha, Gomes and Vidal to surprise Las Palmas midfielders on the offensive transitions.

It was not up until the 52th minute that Barcelona could beat Javi Varas once again. Another opportunity that came from the wings. This time was Rafinha who made the cut through the left wing to send the short cross. Varas could not grab it and allowed Messi to scored the rebound.

Five minutes later, Javier Mascherano sent a deep, long diagonal to Turan. The Turkish received and measured it with time and space in his favor. He passed it to Rafinha who assisted Suárez for his second goal of the game. Suárez used his fantastic mobility to turn around and score it while he had three defenders over him inside the box.

Barcelona found their effectiveness in just 10 minutes. Because two minutes later, the hosts punch once again thanks to Turan who approached the rebound by Varas after a Suárez’ shot.

In the 80th minute, Barcelona did an amazing counter-attack through Vidal’s feet. He started and finished the play on the right side. Vidal connected with Paco Alcácer through a through pass. Alcácer hold it with one defender over him enough time to gave it back to Vidal who made the cut through the middle of the box to scored his first La Liga goal for Barcelona.