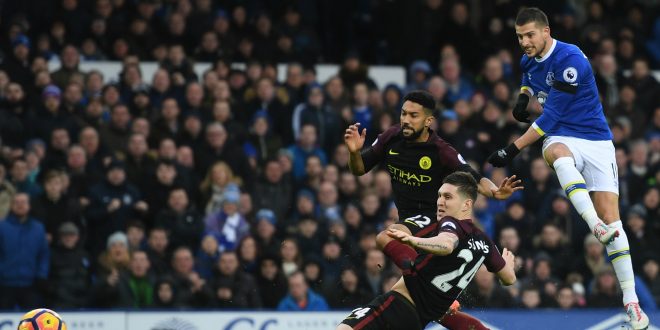 The title chances for Pep Guardiola’s men took a big hit after Sunday’s demolition at Goodison Park. Despite dominating possession as is common for his teams (71% possession as opposed to Everton’s 29%), the defensive issues that have plagued the team were on full display. A porous back-line was ripped apart by an excellent counter-attacking display by Everton, and Claudio Bravo continued his shaky play in net, allowing four goals on as many shots.

Kevin Mirallas was a real sparkplug for the Toffees, providing the assist on Romelu Lukaku’s opener. Mirallas found himself on the right side and sent a low, cut-back cross to his fellow countryman, who slotted a first-time finish past Bravo.

Mirallas kicked off Everton’s second-half blitz with a goal two minutes after the break, sending a low and driven, right-footed effort to the lower left corner of the goal.

Mirallas doesn't like to waste a lot of time. Everton up 2-0 on #PLonNBC pic.twitter.com/Gnhp9aSCCP

Everton sealed the emphatic win with two goals in the final 15 minutes, taking advantage of sloppy defending to hand Guardiola his worst loss in the league since he took over. City now sit in fifth place and ten points behind table-toppers Chelsea, while Everton sit 11 points behind the top 5 and carry a four-game unbeaten streak in the Premier League.