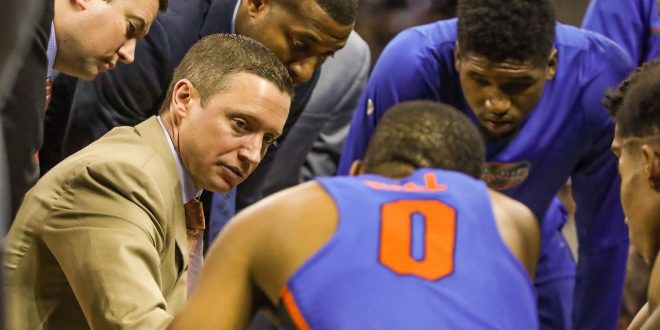 At a glance, South Carolina’s 57-53 win over Florida on Wednesday night looks like a defensive masterpiece put on by the most defensively efficient team in the nation. Under further examination, the Gators 0-17 performance from beyond the arc and 15-of-28 (54%) showing from the free throw line cost them their first SEC game of the year. Florida’s historically bad play from downtown marked the first time since January of 1992 that the Gators didn’t sink at least one three-pointer.

The Gamecocks are now one of only two teams, including Kentucky, to still be undefeated in the conference. UF Head Coach Mike White discussed the team’s defensive success and offensive ineptitude following the game.  He also mentioned that Thursday will be a “heavy film day,” recapping this game and previewing Vanderbilt.

Florida only had two players finish in double-digit scoring. That list starts at Canyon Barry (13 points) and ends at Kasey Hill (11 points). Barry has now scored 13 points in seven of his last eight games off of the bench. Hill added four steals and two assists but failed to score in the second half. Sindarius Thornwell led all players in scoring with 20 points, adding five rebounds.

38 of the Gators’ 53 points came in the paint, while 26 of their points came off of the bench. 55 total fouls were called in this one, with 32 of them coming in the second half. Florida turned the ball over 16 times to South Carolina’s 15 giveaways. Neither team led by more than eight points at any time in this game and both teams had less than .800 points per possession. 53 points were a season-low for the Gators. Coach White talked about the turnover battle heavily following the conclusion of the game.

The first score of the game came nearly seven minutes into the contest as Kasey Hill stole a pass from Sedee Keita and finished the play with a lay-up. That basket came at the 14:12 mark of the first half. Hill followed the play up immediately with another takeaway and transition basket to put the Gators up by four.

South Carolina ended an over seven and a half minute scoring drought after Rakym Felder nailed a three-pointer from the far corner with 12:27 left in the first twenty minutes. At the under-12 media timeout, the two teams were a combined 3-of-19 from the field with 15 total turnovers.

Despite starting 0-for-9 from beyond the three-point line, the Gamecocks led by two points with just under nine minutes left to play in the first frame. At this point in the contest, Florida was shooting 25 percent from the floor, while South Carolina shot an even worse 18 percent from the field.

With just under four minutes left to play in the first half, Florida held their largest lead of the game up to that point. The Gators led 23-16 and finally found their offense by getting into transition and out-running the Gamecocks.

Florida closed the half on a 20-10 run, taking a 28-21 lead into halftime. The Gators failed to make a three-pointer in the first half, going 0-for-8 from beyond the arc. They shot 39 percent from the field, while South Carolina went 7-of-30 (23%) from the floor. 24 of Florida’s first half points came in the paint, while SCAR only scored six of their 21 points in the key.

Free throw shooting was poor on both ends in the first frame. The Gators went 4-of-8 (50%) from the charity stripe, while the Gamecocks went 4-of-9 (44%). Despite going 1-of-3 at the foul line, Kasey Hill led all players at the half with 11 points on 5-of-8 shooting, adding four steals on top of a balanced stat line.

Transition basketball was prevalent in the first 20 minutes as UF turned the ball over nine times. SCAR had 10 giveaways in the first half, leading to only four points.

KeVaughn Allen opened up the scoring in the second half by going 1-of-2 at the free throw line. The point was Allen’s first of the game, as he was held scoreless in the first twenty minutes. South Carolina opened up the second frame with a 5-1 run, diminishing the Gators’ lead to three.

After a nearly four-minute scoring drought for both teams, South Carolina’s Chris Silva ended the streak with a free throw. At this point in the game, the Gamecocks led 31-30 with 13:23 left in the game.

A 14-1 run by USC increased their lead to five with 11:59 left to play in the contest. During this run, Florida failed to score a point in almost six minutes of game time.

A quick 5-0 run, capped off with a John Egbunu completed And-1, brought the Gators within one point with fewer than three minutes remaining in the game.

Florida made six of their final eight shots to finish the game, but it simply wouldn’t be enough as South Carolina won the game 57-53.

The Gators play next on Saturday at noon against the Vanderbilt Commodores. That game will take place at the Exactech Arena at the O’Connell Center.