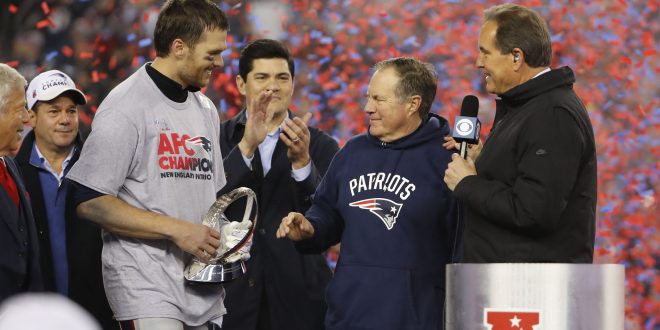 Belichick and Brady Heading to Their Seventh Super Bowl Together

You’ve heard enough about Tom Brady being drafted 199th in the 2000 NFL Draft.

You’ve heard enough about Bill Belichick being fired from the Browns and the Jets before finding a home in New England.

On Sunday night, the two of them did it again—they made it look easy.

Another blowout playoff win for the Pats, their second in a row, as New England defeated Pittsburgh 36-17 in the AFC Championship game.

Tom Brady bounced back from a two-interception Divisional Round victory over Houston by throwing for 384 yards with three touchdowns and no turnovers.

Belichick is currently tied with former Dolphins coach Don Shula for the most Super Bowls coached, with six. He will own that record for himself when Super Bowl LI kicks off.

Until that game kicks off on February 5 at 6:30 p.m. from Houston, the mind games begin. And no one is better at those than Bill Belichick.

Bill Belichick didn't know the Falcons were his Super Bowl opponent until his press conference. pic.twitter.com/XHlfdVYW4D

Here’s the full quote from Belichick, as he went on to say how talented his Super Bowl opponent is.

Let’s take a look at the previous Super Bowls that B&B have been in together:

2002: Despite being a 14-point underdog, Tom Brady won MVP as the Patriots won their first championship 20-17 against the Rams on Adam Vinatieri’s game-winning 48-yard field goal as time expired. New England led by 14 at halftime.

2005: The word “dynasty” starts swirling around after New England wins another Super Bowl by three, defeating Philadelphia 24-21. Deion Branch won MVP as Brady went 23-for-33 for 236 yards and two touchdowns.

2015: Russell Wilson threw it on the one-yard line, and Malcolm Butler picks it off to win the Super Bowl for the Patriots 28-24 over Seattle. Brady won his third MVP, with four touchdowns.

Let’s Go Over the Notes

Brady has TRAILED in every Super Bowl he has played in, winning four of six.

All six Super Bowls have finished as three or four-point games.

We are in for a fun one in Houston between Tom Brady and Matt Ryan.