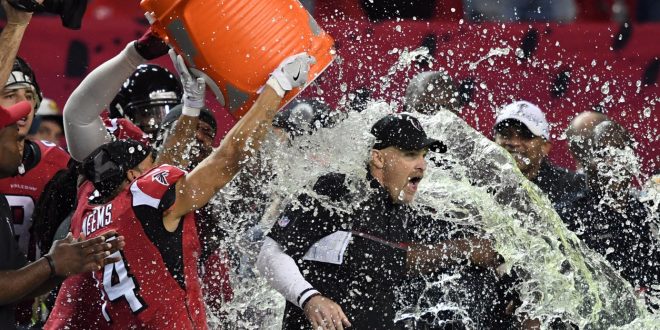 For just the second time in franchise history, the Atlanta Falcons are heading to the Super Bowl.  Their NFC Conference Championship win over the Green Bay Packers Sunday night clinched the Falcons their spot in this year’s big game.  Atlanta will face the New England Patriots on February 5.

The Falcons took no mercy on the Packers Sunday night, slicing and dicing the Cheese Heads en route to the 44-21 win.  This win to reach the Super Bowl was indeed a sweet one for Atlanta.  The last (and only) time Atlanta went to the Super Bowl was in their 1998 loss to the the Denver Broncos.

Falcons quarterback Matt Ryan threw for an impressive 392 yards and four touchdowns. The 31-year-old was drafted in 2008 as the third-overall pick by the Falcons and is continually one of the best quarterbacks in the league.  ESPN currently ranks Ryan as the top quarterback in the league quarterback

rankings, just .3 points ahead of Tom Brady.  Ryan has thrown for more passing yards than any other quarterback making his first Super Bowl appearance, with more than 37,000 yards.

Ryan was a clear standout in the game, but he wasn’t Atlanta’s only.  Julio Jones, a wide receiver battling a foot injury, did not let that stop him on his way to a great performance.  He boasted nine receptions for 180 yards, along with two touchdowns. He helped the Falcons and their unstoppable offense run laps around Green Bay. His ability to attract extra defensive attention allows Ryan and the offense more open space to get the ball to the other receivers.

Green Bay quarterback Aaron Rodgers only managed 287 yards on the night, along with three touchdowns. The Packers were unable to stop Atlanta’s strong offense, while Rodgers struggled to get past the Falcon defense. Rodgers and the Packers saw their eight-game win streak came to a screeching halt in the process.

Ryan will head to his first Super Bowl to face Tom Brady and the Patriots.  Brady is a four-time Super Bowl champion and three-time game MVP.  The Falcons are no strangers to the playoffs but do not have a Super Bowl win to show for it.  The Patriots, however, have been to nine Super Bowls in franchise history, winning four of them since 2002.  While the Falcons were trying to get to a Super Bowl, the Patriots were busy winning them under head coach Bill Belichick.

Belichick isn’t the only head coach with Super Bowl experience, however.  Atlanta head coach Dan Quinn, a former Florida Gator defensive coordinator, made a two appearances in the last few years.  As defensive coordinator for the Seattle Seahawks, Quinn won the Super Bowl in 2013.  He returned in 2014, but the Seahawks lost to the Patriots.  This is Quinn’s third appearance in five years.  The biggest difference– this time Quinn is calling all of the shots as the head coach.  Click here to hear what Quinn had to say about Sunday’s win.

Ryan and the Falcons need to be dynamic on the field to beat New England.  The game will be a showdown between the best two quarterbacks this season, not just in QBR, but also yards per attempt, drop backs, and completions.