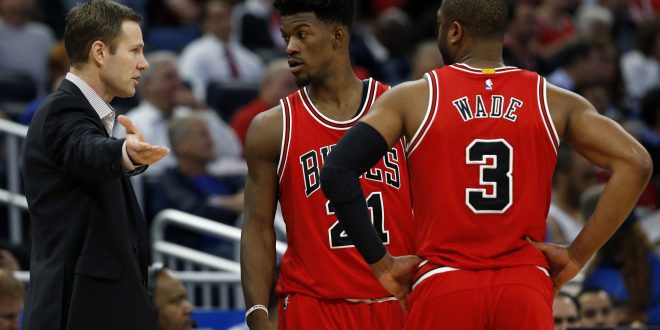 The media went into a frenzy as soon as it became known that Dwyane Wade had decided to take his talents from South Beach to the Windy City. From day one, there were multiple questions as to whether the backcourt of Wade, Butler, and Rondo could co-exist. The Chicago Bulls proved the doubters wrong early with an 11-7 record through the first 18 games of the season. Since then, everything has fallen apart in Chi City. Rondo lost his starting gig and has proved to be another locker room distraction, and the Bulls are 12-17 in their last 29 games and sit at 23-24 overall on the season.

Jimmy Butler and Dwyane Wade didn’t hesitate to show displeasure with the team after a loss to the Hawks that saw a ten point lead disappear within the final three minutes of action.

Butler, the team’s undisputed leader, directed criticism toward his teammates by saying that each player needs to perform the best that they can in their respective role.

Wade, like Butler, is also fed up with the evident lack of effort and chemistry.

Wade pointed out that this league isn’t solely based on talent, but rather many other intangible factors.

“It’s not about the talent. Everyone’s in this league for a reason. But it’s more than talent in this league. I tell my son that all the time: Talent is not just going to make you a great player.”

“There’s other things that help you become a good player, a solid player. A team that people can count on. A player that a team can count on. You guys see our lineup. There’s a lot of shuffling around. Coach don’t feel you can count [on] that many guys right now. That can’t be. I know there’s guys over here waiting for their opportunities, but hopefully, when they get them, they step and do their job that needs to be done.”

Even though Wade does make some valid points, the Bulls do struggle with a lack of talent. While Butler is considered a full-blown superstar, no one else provides legitimate production on a nightly basis. The 35-year old Wade is still putting up 19.1 points per contest, but his field goal percentage (42.8%) is almost 3% lower than the league average of 45.5%. Taj Gibson (11.5 points, 7.5 rebounds) and Robin Lopez (9.2 points, 7.0 rebounds) have proved to be solid role players, but both have limited upside at this point in their careers.

The Bulls, who are very fortunate to still be the eighth seed in the East, could be a productive team if they actually figure out how to coexist. They are the best rebounding team in the NBA, averaging 47.3 rebounds per game. Chicago pulls down 13.4 offensive rebounds per game, which is also the top mark in the league. These offensive rebounds provide major second chance opportunities, which the Bulls fail to take advantage of. As a team, they shoot 43.4% from the field, which is the second-worst mark in the league, only ahead of Memphis. If the Bulls could figure out a way to capitalize on these missed opportunities, maybe there wouldn’t be this much drama up in Chicago.

Last season, Butler attempted this same tactic by calling out head coach Fred Hoiberg for not being assertive enough. The Bulls went on to win seven of their next nine games, which put them ten games above .500. Maybe Wade has realized he made the wrong decision by leaving Miami, or maybe the rest of the team will take this verbal attack in stride and vault the Bulls back up near the top of the Eastern Conference standings.

Previous Billy Donovan III Leading the Way for St. Francis
Next Gators Need to Rediscover Defensive Identity to Have Shot at SEC Title