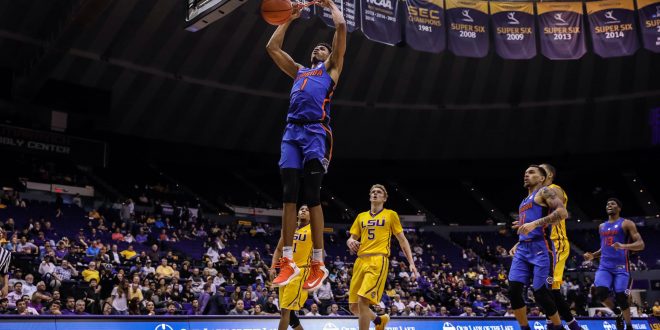 The Florida men’s basketball team clicked on all cylinders Wednesday night as they easily dismantled the LSU Tigers by a score of 106-71. A surprising, yet timely barrage of first-half three-pointers put the Gators up big early, and they never looked back after that. A well-balanced attack saw six Gators put up double figures, including a school-record 19 three-pointers. Devin Robinson led the charge with a career-high 24 points and eight rebounds.

Gators are Own Worst Enemy

The Gators ability to lock-down opposing offenses has kept them in contention atop the SEC, even with an inconsistent, inefficient offense. The offense tends to catch fire every so often, but it cannot be relied on in any big-game situations.

A scrappy, hard-fought loss to South Carolina on the road is nothing for the Gators to be ashamed about. However, the Gators losing streak continued after a lack of grit and hustle on the defensive end allowed Vanderbilt to shoot 56.5 percent from the field in the second half and finish 10-for-25 (40%) from beyond the arc.

While the LSU blowout put the Gators back on track for the time being, they still need to get back to owning the defensive end of the court for the full 40 minutes in order to stay relevant in the college basketball world.

Other than South Carolina, Florida has the best defense in the conference. They rank 3rd in the SEC in scoring defense, allowing 66.8 points per game. The Gators have relied on their defense to create offensive opportunities, specifically in transition. They average 8.2 steals per game, which ties South Carolina for the best mark in the SEC. This defensive-oriented squad also forces 16.4 turnovers per game, which ranks 22nd in the country and also only trails the Gamecocks for the top mark in the conference.

The Gators constantly use their athletic advantage to put pressure on opponents and force turnovers, which allows them to push the ball in transition and open up easy scoring opportunities.

Florida can’t seem to play sound defense in the second half of games, which has plagued them all season. They have allowed their opponents to score more points in the second half than in the first half in 13 straight games and 17 out of 20 overall.

In the press conference before the LSU game, head coach Mike White pointed out that against the Gators top 12 opponents, they have allowed these teams to shoot 76 percent from the field and have given up 40 percent of defensive rebounds in the first four minutes of the second half. This will continue to haunt the Gators until they can find a way to come out of halftime aggressive and engaged.

In regards to these major second half struggles, Mike White stated, “I’ve got to keep searching. I haven’t found the answer. Our guys, you know, to a certain extent, have to put it on themselves as well. We addressed it again yesterday, but it’s something that, if you talk about something enough, you know, at some point the question becomes, how important is it to you? How bought are we to the fact that it’s a major deficiency of ours?”

We have seen two types of basketball from the Gators this year. The first involves minimal energy and a lack of focus, which has consistently lead to bad basketball on both ends of the floor. The other is when Florida actually decides to lock in defensively, get in transition, and spread the ball offensively. Playing this brand of ball offers viewers some beautiful Gator basketball that hasn’t been seen since the good ole Billy Donovan era.