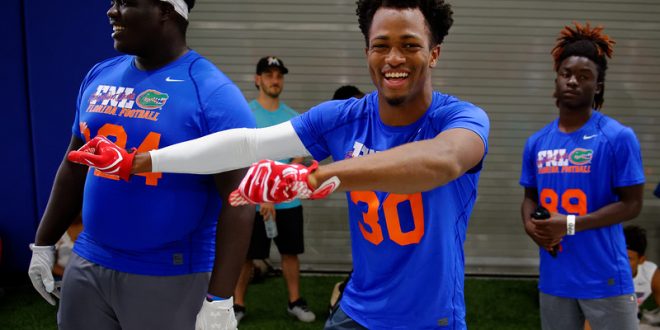 GAINESVILLE, FL –  The Florida football program received three verbal commitments for the 2017 class over the weekend.  Heading into Friday before the biggest recruiting weekend of the year, Florida’s draft class was outside the top 20 nationally, but that might be changing. Starting on Saturday morning, the Gators landed three star linebacker Nick Smith who committed to the Gators over LSU, Louisville and Michigan State. Smith now is the third linebacker in the 2017 class along with James Houston and Ventrell Miller.

Smith was not the only recruit Florida reeled in on Saturday; four star cornerback Brad Stewart took to twitter to announce he too would be joining the Gators.  Stewart choose Florida over 39 other offers, including big names such as Alabama, LSU and Florida State. He will join defensive backs Marco Wilson (Quincy Wilson’s younger brother) and three-star Shawn Davis in the 2017 class at the position.

Gotors take care of gators… Truly a blessing to be apart of the family🐊 #BDN pic.twitter.com/xgTsOkuv27

Head coach Jim McElwain announced his excitement on twitter after the news of both Smith and Stewart signed with his iconic Chomp Chomp tweet, times two.

Finally, safety Donovan Stiner verbally committed Sunday night; he is the only true safety in Florida’s 2017 class. Stiner was originally committed to Houston but flipped to the Florida Gators after his official visit last weekend.  He was also the recipient of a scholarship offer from the University of Florida earlier this week.

After Donovan Stiner announced his commitment Sunday night, the Gators have officially landed 17 recruits in their 2017 class. This moved them up to 20th in the 247Sports recruiting rankings. The Gators will look to add a few more recruits before National Signing Day this Wednesday. Coach Jim McElwain will host a press conference Wednesday afternoon to announce Florida’s full 2017 class.