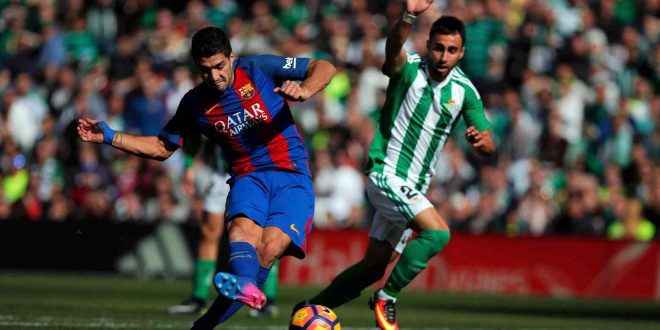 FC Barcelona qualified once again to the Copa del Rey semifinals. A stage that they are used to play practically on a yearly basis. This means that the fully loaded month of January will be completed by the time they face Atlético de Madrid on Wednesday for the first leg of the Copa del Rey semifinal. But first, they had to go to the Benito Villamarín Stadium to keep up the fight against Real Madrid and Sevilla FC for the first place in the league.

Real Betis started with what it seemed at the beginning of the game like a conservative 5-3-2 scheme. A five-player backline that allowed them to contend any chance from the MSN — Lionel Messi, Luis Suárez and Neymar. Barcelona were not able to create clear collective plays nor advance their backline to the middle of the pitch. Messi was the main nucleus of every offensive chance. He sent a couple of very good through-passes to Suárez and Neymar that barely ended up alarming Antonio Adán.

One of the problems that Barcelona is having is that they are not being consistence on their offensive approach without the ball since the beginning of the game. Barcelona is defending on their half of the pitch too much. This allows even defensive teams like Real Betis to gain more work spaces around the midfield area. The high pressure to recover the ball has always been one of the main keys to success for Barcelona.

Of course, the absences of Andrés Iniesta and Sergio Busquets has an impact on the system. The team does not have the same pause nor passing fluidity without those two. Real Betis took advantage of this and did whatever they could to fill up the gaps and cut the passing lanes forcing Barcelona to send long passes from the backline to the forwards. Daniel Ceballos had an amazing game for Real Betis. He constantly pressure Denis Suárez when fighting for the ball and created very good chances on the attack for his teammates and himself.

Real Betis’ goal came in the 75th minute after having a feisty attitude when attacking and forcing Barcelona defenders to commit mistakes. Alex Alegría took advantage of the ball deflected by Marc-André Ter Stegen with the bunch of players over him on the corner. Alegría scored the rebound and put Real Betis 15 minutes away from what was going to be maybe the best win of the season for them.

Four minutes after Real Betis’ goal, the game had referee controversies that will probably be subject of discussion throughout the rest of the week. In less than five seconds, the referee did not call two plays that had Aissa Mandi as the protagonist: a clear foul on Neymar inside the box and also a goal that passed through goal line that was deflected by Mandi.

Once again, one of the three up front saved the day for Barcelona — Just to be more specific, it was the Messi-Suárez connection. Messi provided another effortlessly through-assist to Suárez who sent the shot once he got the ball at the 89th minute.

A draw that put Barcelona in danger of loosing their chances of winning their third consecutive league title under Luis Enrique. Meanwhile players, coaching staff and fans at Real Betis can have a glorious rest of the week because of their level demonstrated against such a talented team like Barcelona.