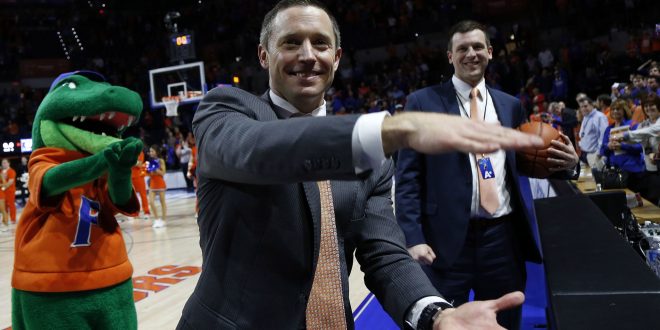 No. 17 Florida Looks to Keep the Ball Rolling Against Georgia on Tuesday

All it took was back-to-back losses for the Gators to start playing their best basketball of the season. After two straight defeats and a team meeting to see where the program stands, Florida has gone on a four-game win streak in which they’ve outscored their opponents 371-243. Most recently, UF took down #8 Kentucky, 88-66, at the O’Dome on Saturday night. The game helped elevate Florida to No. 17 in the latest AP Poll while dropping Kentucky to No. 15, their lowest rank of the season.

On Tuesday night, the Gators will take on the Georgia Bulldogs, a team that also gave Big Blue Nation a run for their money. The Bulldogs took the Wildcats to overtime on January 31 before eventually losing by nine. Tuesday’s contest will be the second meeting between Florida and Georgia, but the first in Athens. The Gators won the first match-up, 80-76, in overtime at Exactech Arena.

Florida has found a solid yin and yang between their offense and defense in the past few weeks. The Gators now rank Top 50 in the nation in both points per game and points allowed per game, coming in at 47th in points for (79.7) and 42nd in points against (65.6). Per our good friends over at KenPom, UF has also climbed in both offensive and defensive efficiency. The Gators rank sixth in the nation in defensive efficiency and 21st in offensive efficiency. Florida has a 1.51:1 assist/turnover ratio in their past four games. After offensive struggles throughout the first half of the season, the Gators have found their groove, moving well without the ball on offense and finding the right man with the pass.

Kasey Hill and Chris Chiozza have been Florida’s X-Factors during their four-game, 20+ point win streak. Chris Chiozza was named SEC Player of the Week, while Kasey Hill had arguably the best game of his career against Kentucky, in which he matched his career-high in scoring, posting 21 points, six assists, five rebounds and one steal. Hill has 14 straight games with at least one steal.

Chris Chiozza, unlike Kasey Hill, was having a season to forget previous to Florida’s game on January 25th against LSU. Coming into that game, Chiozza had only posted double-digit scoring twice this season. “Cheese” started his stellar stretch with a nine point, 10 assist performance vs. the LSU Tigers. Following that game, he would have an average contest vs. Oklahoma, but break out in the following two games. Chiozza recorded the first triple-double of his career five nights later against Missouri, finishing with 12 points, 12 rebounds, and 10 assists. In the team’s most recent victory vs. Kentucky, Chiozza seemed to be everywhere on the floor, recording two points, nine rebounds and nine assists vs. the Wildcats. If Chiozza can continue this stretch of greatness, in which he has a 4.71:1 assists/turnover ratio off of the bench, the Gators will be in great shape come March.

When it comes to UGA, there are really only two players you have to watch out for on a consistent basis. Those two Bulldogs would be Yante Maten and J.J. Frazier. Maten currently ranks second in the SEC in scoring (19.7 PPG) and fourth in the SEC in rebounding (7.4 RPG). The junior from Michigan has posted five double-doubles this season but hasn’t recorded one since January 11 against Ole Miss. In the team’s most recent game vs. South Carolina, Maten finished with 18 points, four rebounds, and four blocks. He’s also scored at least 20 points in four of Georgia’s last six games.

J.J. Frazier and Kasey Hill are very similar guards as we’ve discussed before on the Rowdy RoundTable. Frazier is 5’10” and 155 pounds of mean. The speedy senior point guard ranks second in the SEC in steals per game (2.0), sitting two spots ahead of Kasey Hill. Frazier has the ability to score from more spots on the floor than the Gators’ veteran leader and averages 16 points per game on 38.8 percent shooting from the floor. The senior is looking to continue his recent dominance in what will be his last regular season game vs. Florida. Frazier has scored in double-digits in all but three of the Bulldogs’ games this year.

As discussed before, Florida’s solid play on both sides of the ball has propelled them to be one of the most balanced teams in basketball.

Came off the bench to notch only the fourth triple-double in school history – and first since 2008. #SECMBB POTW: @Chiozza11 pic.twitter.com/nSESGKLu52

The Gators now sit at No. 19 in the newest AP Poll, their highest rank of the season. They’ve also climbed to No. 7 overall in KenPom’s ratings. In the latest Bracketology by ESPN’s Joe Lunardi, Florida has climbed to a No. 3 seed and would take on Bucknell in Orlando, which is essentially a home game for the Gators. UF has already played three games in Orlando this season, beating Miami and Seton Hall, while losing to Gonzaga in the Advocare Invitational.

After staying on the bubble for a couple of weeks, Georgia is now nowhere to be found on Lunardi’s latest bracket. The Bulldogs have lost four of their last five games and need a quick turnaround if they want to find themselves in the big dance come March.

Tuesday night’s game tips-off at 7 p.m. in Athens and can be seen on ESPN2, with Tom Hart and Kara Lawson on the call. As always, you can listen to the game on the Gator IMG Sports Network, with Mick Hubert and Bill Koss on the call.

TONIGHT: Our SEC Inside episode airs at 9:30 p.m. on @SECNetwork – you do not want to miss it!