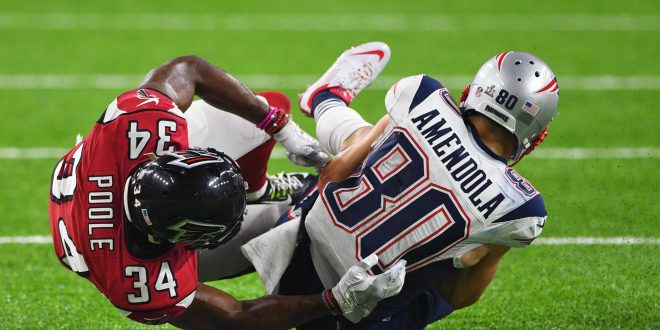 They not only made an impactful appearance in the game but they also made NFL history.  The Falcons were the first ever defense to start four rookies in Super Bowl history, two of the four being Keanu Neal and Brian Poole. Starting these rookies was former UF defensive coordinator Dan Quinn, who is now the head coach of the Atlanta Falcons. Although the game did not end the way they had hoped, these former gators have made the Gator Nation very proud.

Not many players can say they reached a Super Bowl in their rookie year. @Keanu_Neal is grateful. pic.twitter.com/jD2dtYxy7d

In the 2016 NFL Draft, Neal was selected as Atlanta’s first round draft pick. He played and started in 14 games. Neal had 106 tackles and five forced fumbles, which both ranked second on the team. During Super Bowl 51, Neal tallied a game-high of 13 tackles.

Poole was an undrafted rookie for the Falcons, playing in all 16 regular season games and starting nine of them. During the regular season, he totaled 59 tackles, 10 pass deflections, one sack and one interception. Poole had four tackles in last night’s Super Bowl.

Another Gator connection in Super Bowl 51 is Atlanta’s head coach, Dan Quinn. Quinn was Florida’s defensive coordinator in 2011-12. During his time at Florida, Quinn led the Gator defense to be ranked eighth nationally in total defense. After Florida, Quinn was hired by the Seattle Seahawks. During his two seasons with Seattle, he helped the Seahawks reach consecutive Super Bowls beating the Broncos but then falling to the Patriots. Super Bowl 51 was Quinn’s third Super Bowl appearance in four years. This time as head coach for Atlanta, Quinn believes that his team fought their hardest but just got a little tired at the end. Quinn says that even though it’s tough having to face this big loss, he believes that this is just the beginning of what the team can truly become.
At the conclusion of Super Bowl 51, there have been a total of 46 former Gators who have made appearances in 35 Super Bowls since the commencement of Super Bowl 1 in 1967.
Share

@JenniferStehlin
Previous Georgia Gearing Up for Gators
Next No. 17 Florida Looks to Keep the Ball Rolling Against Georgia on Tuesday