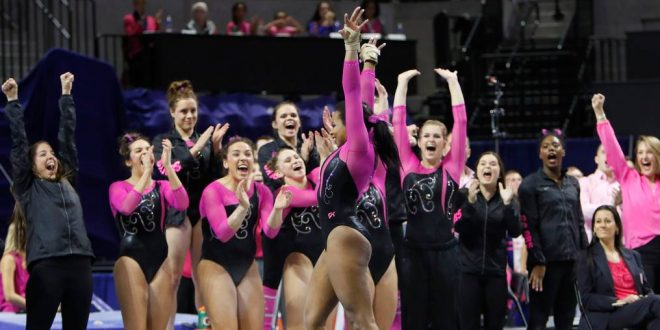 No. 3 Florida Gymnastics Prepares for No. 9 Georgia

The Florida Gator gymnastics team suffered its first loss of the season in its SEC road opener last Friday against the Alabama Crimson Tide. Despite the 197.825-197.425 loss, this was Florida’s highest road score of the season.  Now, the Gators will be back home on Friday to host Georgia.

The Gators are looking to bounce back in another great SEC match up as third ranked Florida hosts ninth ranked Georgia in the Exactech Arena at the Stephen C. O’Connell Center. But as good as this match up is on paper, another story line has dominated the Gators this week.

Throughout this past week, many of the gymnasts have been fighting off an illness.  Florida’s Alex McMurtry says some of her teammates, including herself, were really sick after last week’s meet against Alabama. McMurtry is still feeling weak and is unsure whether she is going to compete in this Friday’s meet.

Florida head coach Jenny Rowland says there might be some changes in the lineup for this week’s meet against Georgia. Only three members of the Gator team have not been affected by this virus. Rowland is concerned about everyone’s energy level heading into this weekend’s meet.

Tune into the SEC Network at 6:45 p.m. to catch coverage of the meet.

Sydney is a senior studying telecommunications with a specialization in sports media at the University of Florida. She is a multimedia sports reporter for ESPN 98.1 FM/850 AM WRUF and WUFT-TV.
Previous Recap: Florida Women’s Basketball Knocks off Arkansas 57-53
Next As Final Stretch of Season Approaches, NHL Playoff Picture Still Open