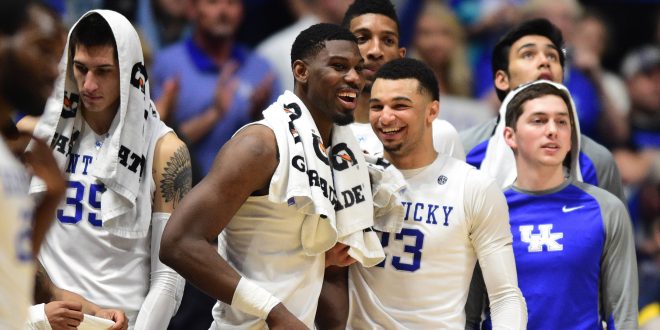 SEC Preview: Kentucky Looks to Get Back on Track Against Alabama

The Kentucky Wildcats will be heading to Tuscaloosa this weekend as they take on the Alabama Crimson Tide this Saturday. The No. 15 Wildcats are currently in a three-way tie for 1st in the SEC standings, while unranked Alabama sits at 4th overall in the SEC.

Kentucky is coming off a 92-85 win against the LSU Tigers. The Wildcats are looking to get back on a winning streak after losing to the Tennessee Volunteers, the Kansas Jayhawks and the Florida Gators within the past couple weeks. Kentucky head coach John Calipari says they have been working on their defense. Freshman Mali Monk is currently the top scorer for the Wildcats with an average of 21.9 points per game. That is almost double Alabama’s lead scorer Braxton Key, who averages 11.8 points per game. Despite Alabama not having one top scorer getting most of the points, Calipari is impressed with Alabama’s team.

Alabama is heading into this week’s game with a lot of momentum after defeating the No. 19 South Carolina Gamecocks in quadruple overtime, 90-86, this past Wednesday. This was Alabama’s first road  win against a ranked opponent since 2004. It was also Alabama’s second quadruple overtime game in school history. Alabama’s and Kentucky’s season leaders for rebounds have similar averages. Alabama’s Braxton Key has an average of 6 rebounds per game, while Kentucky’s Edrice Adebayo has an average of 6.9 rebounds per game. Alabama head coach Avery Johnson says Kentucky has a very talented team. In order to for Alabama to win, their defense needs to step up against Kentucky’s offense.

Tipoff is set for 1 p.m. and you can catch coverage of the game on CBS.

Sydney is a senior studying telecommunications with a specialization in sports media at the University of Florida. She is a multimedia sports reporter for ESPN 98.1 FM/850 AM WRUF and WUFT-TV.
Previous Gainesville Boy’s Basketball District Championship Preview
Next Florida Football Announces Coaching Changes