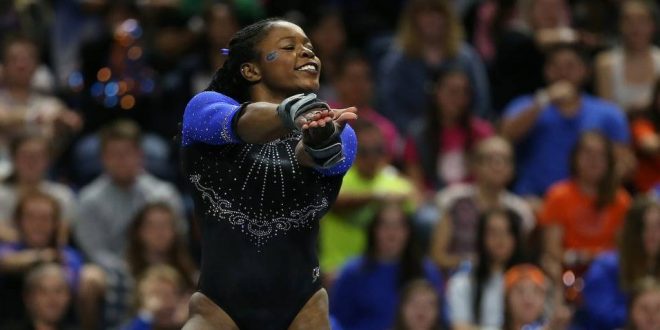 Another Perfect Score For The Gators As Gymnastics Team Tops Georgia

The Exactech Arena was lit up on Friday night as the Florida Gators hosted the Georgia Bulldogs in a gymnastics meet featuring two top ten ranked teams.

The Gators 197.975 win over the Bulldogs 196.525 is the second highest total in the nation this season. After the Gators fell short to Alabama during last week’s meet, Florida was able to turn things around despite illnesses throughout the week and the meet was highlighted by a perfect 10 on Bars from Florida’s Alex McMurtry.

This is the third time McMurtry received a perfect score on her uneven bars routine. The first two came during her sophomore year at Florida against Alabama and North Carolina. She was the only gymnast in the nation to score multiple 10’s on bars in 2016.

McMurtry also took her second event title of the night on the balance beam, matching her collegiate-high of a 9.95 for the second time in 2017 while reaching that score for the seventh time in her career.

Perfection & Near Perfection lead to nation's No. 2 total of season in Gators' win vs Georgia #GoGatorshttps://t.co/Maq9aeVWzw pic.twitter.com/K4A9zGDdoz

Another star for the Gators was Rachel Slocum who scored a 9.975 on her vault.

She was the first one to get the crowd going as they saw a score of a 10 from the first judge but fell short from getting another perfect score from the second judge. This marks Slocum’s highest collegiate score for her pike-front half vault.

The All-Around Goes To…

The All-Around winner for the night went to Alicia Boren as she scored a collegiate and team-season high of 39.725; it was her second all-around win of the season.  She scored a 9.95 on the floor exercise for the third time in the last four meets and she also won two events on the night.

The Gators will travel to Fayetteville to take on Arkansas on Friday, February 17.