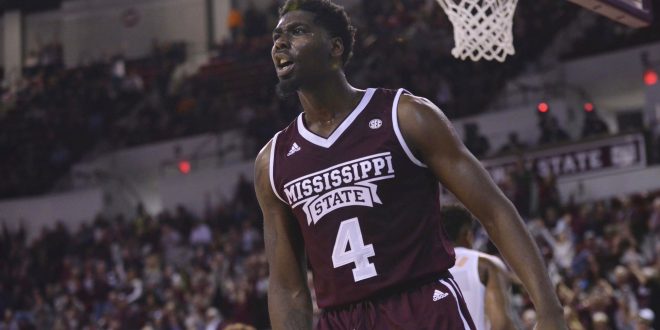 Space Jam night is on Saturday at 7 p.m. come #PackTheHump for our game against South Carolina!#HailState pic.twitter.com/6eGHFJUunh

Besides Weatherspoon, the Bulldogs have a dynamic freshman duo in Lamar Peters (12.4) and Mario Kegler (10.1) averaging double-digits a game.  They hope to get the Bulldogs their first victory over a top 25 team since the 2011-12 season.

C'mon, Q! It's game time! Lace up your Adidas, grab your Wheaties & your Gatorade, and we'll pick up a Big Mac on the way to The Hump! pic.twitter.com/qbw6VKe51b

Mississippi State shoots the ball above average in the SEC at a rate of 45.1 percent.  Though, what may give them their biggest chance is holding their opponents to 31.9 percent when shooting the three ball.

South Carolina has proven to be one of the top teams in the SEC as they post up three victories against top-25 opponents.  Its been a long time since they’ve seen this much success as the last time they posted two consecutive 20 win seasons was over a decade ago.  With the help of Senior Sindarious Thornwell, the Gamecocks may reach heights that they have never accomplished before.

Thornwell is the standout for South Carolina as he comes off his last game posting 44 points against Alabama.  He has averaged over 20 points per game and ranks third among the SEC in scoring.  Their backcourt overall has come off huge as they have scored 80% of their team’s points in the last five games.  South Carolina is coming off a loss to Alabama and will look to bounce back with a win against the Bulldogs.

The Gamecocks and Bulldogs are ready to roll in Starksville.  Will the Bulldogs be able to pull off the upset?  The game will be played at 8pm on Saturday.