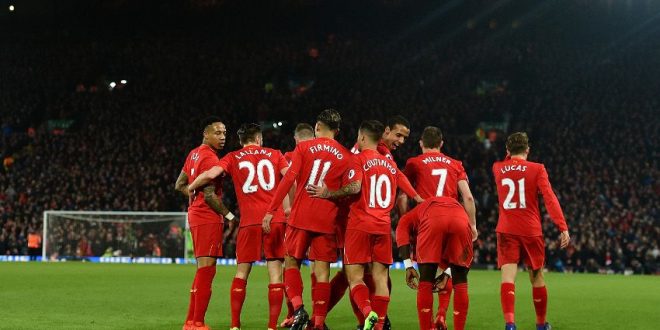 Liverpool brought in Georginio Wijnaldum for Emre Can while Tottenham made no changes to the side that won 1-0 against Middlesbrough last week.

The result was a bit of a surprise with Liverpool winning only one game in their previous 10 across all competitions and Tottenham coming off of an 11-game undefeated streak. It was also a shock to see the league’s best defensive team undone by defensive errors for both goals.

The opening 10 minutes saw the tone being set for the rest of the half with Liverpool’s high pressing system ensuring the ball stayed in Tottenham’s half, isolating Kane, Son, Alli and Eriksen. There were a couple corners but no noteworthy chances at the start of the game.

The next 10 minutes were action-packed and saw both goals being scored despite the half starting well for Tottenham. Some good buildup play in the 11th minute in the center of the pitch between Dembele, Kane and Wanyama led to the Kenyan passing it to Walker on the right wing. The right back scooped it up to Christian Eriksen who had to control it with his chest and had no option but to shoot from the edge of the box but his shot was high and wide.

Liverpool countered with a chance of their own in the 13th minute. Coutinho won the ball back in the Liverpool half and played it to Lallana who found Clyne in tons of space on the right wing. Firmino could not control Clyne’s cross but the Tottenham defense couldn’t clear the ball and Coutinho managed to find time and space to unleash a shot but Alderweireld made a sensational block from point-blank range to keep the game level.

This just proved to delay the inevitable as Liverpool scored twice in three minutes with Mane picking up his 10th and 11th league goals of the season.

First, the ball pinged around the halfway line and ended up at the feet of Wijnaldum who played a pass through the center of the Tottenham defense into the path of Mane’s cutting run. He beat Davies for pace and powered the ball into above Lloris to make it 1-0 in the 16th minute. Mane doubled the lead two minutes later through poor decision making from Eric Dier.

Dier received the ball in Tottenham’s half and spent too long in possession leading to Mane stealing the ball and running goalward. He pulled the ball back to Lallana on his right but his first time shot from just inside the box was parried by Lloris straight to Firmino whose volley was also saved. The third time proved to be the charm as Mane collected the rebound and shot first-time to make it 2-0.

As the half continued, Lloris proved to be the difference as he denied Mane his hattrick twice. In the 22nd minute, an awful backpass from Kyle Walker led to Mane stealing the ball from Davies and bursting his way to a one-on-one position again but Lloris saved the shot for a corner. Liverpool could not capitalize from the resulting corner but Spurs couldn’t get the ball away and Matip played it to Mane in space on the right side of the box who unleashed a rocket which required a diving save to Lloris’ left to tip over.

Davies nearly made up for his awful game so far by playing Son through with a perfectly timed through ball which beat the offside and left the South Korean clean through but a charging Mignolet smothered the shot in the 26th minute.

Some frustration seeped through with Son picking up the first yellow card of the game in the 28th minute for an attempted chop-down of Firmino. Mane had another chance to get a hattrick after Coutinho played him clean through with a through ball in the 29th but a brilliant last-ditch sliding tackle from Dier saved the day.

The half closed out with Liverpool comfortable with their lead and Tottenham attempting to find their form but to no avail. The London side had a freekick on the edge of the box in the 34th minute which Eriksen just put over the bar but that was their last real chance of the half. Liverpool had a few half-chances with Clyne and Lucas but the former’s shot was straight to Lloris while the latter’s header was over the bar.

Liverpool dominated the half with 13 shots to Spurs’ 5 and 8 corners to Spurs’ 2. Lloris was the only thing keeping Tottenham in the game with his six saves.

Tottenham came out with more fire in their belly and a slightly tweaked formation. Son was almost playing like a second striker while Alli drifted left to create almost a 4-4-2 in attack.

However, this did not change the complexion of the match with Tottenham unable to carve through the Liverpool team or counter their pressing style. The game did spend more time in Liverpool’s half but the Merseysiders managed to halt any opposition momentum by tactical fouls.

Lallana received a yellow card in the 53rd minute for a shove on Wanyama and Matip received one three minutes later for chopping down Eriksen.

The resulting freekick was crossed to Kane and his shot hit the post but he was offside. This was the last chance for a while with the first actual shot of the half coming in the 69th minute. Frustration was clearly growing as there were three bookings in four minutes.

Winding down the clock

The resulting freekick near the touchline was crossed in by Milner and headed goalward by Matip but Lloris was well-positioned. Sissoko was brought on for Dembele and Can were brought on for Coutinho in the 77th minute. The former was Tottenham’s attempt at introducing an attacking threat while the latter was Liverpool’s attempt at shoring up central-midfield. Dier received a booking a minute later for a foul on Firmino.

Ragner Klavan was brought on for Lucas Leiva after the Brazilian suffered a knock to his knee and Vincent Janssen was brought on for Son in the 81st minute. Again, this was a clear attempt from Tottenham to push forward by bringing on an extra striker.

Alderweireld received a yellow a minute later for a foul on Firmino. Another defensive lapse in concentration nearly led to a third goal for Liverpool. The ball was bouncing toward the Tottenham goal and Lloris charged out of the box to clear it but due a miscommunication, Dier cleared it out straight to Wijnaldum. The Dutch international tried to lob the Tottenham captain but his shot was weak and Davies’ headed it back to Lloris.

Liverpool made their final change a minute from time bringing on Trent Alexander-Arnold for Mane so that the Senegal man could enjoy Anfield’s applause and that’s how the game finished.

Themes of the Game

A trademark of Klopp’s teams has been his emphasis on pressing high up the pitch from his attackers. In this specific game, the pressure came from the attacking trio of Mane, Firmino and Coutinho as well as from Lallana and Wijnaldum in midfield.

Another feature of this Liverpool team has been fluidity and interchanging of positions between the front three and the free role of Adam Lallana. This meant that Tottenham defense could face pressure from either of these players, regardless of their position on the pitch.

Coupled with Tottenham’s tendency to play out of the back, this led to serious pressure being faced by the Tottenham backline. As a result, the attacking quartet of Alli, Eriksen, Son and Kane were isolated for most of the first half. In fact, Kane didn’t get a single touch of the ball between the 11th and 26th minute. This was also made clear by Lloris, Walker and Davies having more touches of the ball (204) than Eriksen, Alli, Son, Kane, Sissoko, Janssen and Winks combined (197). 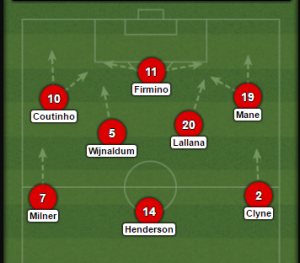 This pressure forced the ball to stay around Tottenham’s goal and created a situation where the four defenders were being pressed by five Liverpool attackers, forcing them to play long balls which led to quick turnovers of possession. The fact that Liverpool’s midfielders were pressing forced Tottenham to play the ball to their fullbacks often to try to get some space. This played into Liverpool’s hands as Clyne and Milner would then join in the pressing.

It’s this pressing which led to the second goal as Mane didn’t give Dier time to collect himself.

Danny Rose, Tottenham’s first choice left back, is recovering from a knee injury and his absence was sorely felt with Davies not able to provide the same solidarity and creativity that the English international can.

Rose has been one of Tottenham’s best players over the past three seasons and has the highest average rating on whoscored.com. According to whoscored.com, he averages nearly three tackles, as well as one and a half dribbles and key passes a game. What Tottenham really missed was his width. 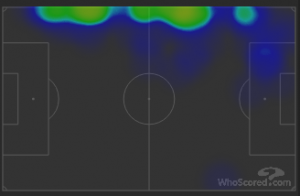 Mane’s overlap with Firmino led to him alternating between playing on the right and playing centrally. Davies was unable to mark Mane and keep up with the overlapping runs of Lallana and Clyne. This was partly due to them having good games and partly due to Davies constantly drifting centrally leaving vast swathes of room on the left. This is what led to two of Mane’s shots which Lloris saved. His inability to mark Mane is what led to the first goal as he was stripped for pace.

Rose has an ability to take on the defensive burden and quickly start counters by playing it to Son and Dembele. Davies did not have much defensive support from those two which is why Liverpool were so threatening from their right.

Tottenham tried to counter this in the second half by moving Alli to the left and using Son almost like a left striker. This provided more defensive support but did not solve the lack of creativity which is what made the second half such a tactical stalemate.

As said before, Liverpool wanted to force Tottenham out wide so that they could win the ball back more often. This strategy was seen clearly when Liverpool would defend in their own half with the team crowding the center of the field and blocking the front of the goal.

This is what led to Kane having the least touches on the field amongst all players who played the full 90 minutes.

Another interesting part of this was that when the ball was with Tottenham in their half, Henderson was the only defensively-positioned midfielder. This could have led to 2-on-1 situations with him being against Dembele and Wanyama but this never happened because the latter two were forced to drop deeper and help counter the five pressing Liverpool players.

This would lead to a situation where Tottenham played with a 4-2-4 with their front four completely isolated and lacking service from the rest of the team.

Liverpool’s compactness also helped them defensively with all 10 outfield players being in a 30-yard stretch of the pitch at certain points of the match.

Player of the match

This was the Senegal international’s second game back since returning from the African Cup of Nations and his presence was sorely missed. Four shots, four on target, two goals, 80% pass accuracy and 2 successful dribbles were part of a triumphant Anfield return for Mane.

Interestingly enough he only had 42 touches, the second-lowest for the Liverpool starting 11. His interplay with Firmino, Clyne and Lallana caused problems for Davies as he was unable to keep up with Mane’s movement and the overlapping runs. He now has 11 goals and 4 assists in the league for Liverpool.

Liverpool now find themselves fourth with 49 points, 10 points behind league leaders Chelsea while Tottenham remain a point ahead of them in second place. Liverpool’s next match is on the 27th where they travel to defending champions Leicester City. Tottenham travel to Belgium to play Gent on Thursday in the Europa League.