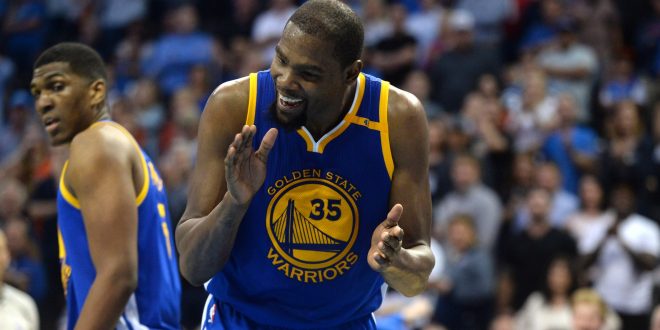 Warriors down Thunder in Durant’s return to OKC

Saturday night marked one the most anticipated returns in the history of the NBA. After eight seasons with the franchise, Warriors forward Kevin Durant returned to Oklahoma City to face his former team. Fans greeted him with a serenade of boos and wore special shirts just for the occasion.

Durant dropped 34 points and grabbed nine rebounds in a dominating all-around performance. Durant shot 57 percent from the field and was a perfect 7
-7 from the free throw line. While all eyes were centered on Durant, other stars also showed out. Guard Steph Curry posted a near triple-double with 26 points, eight rebounds and nine assists. Guard Klay Thompson also contributed in a big way, adding 26 points in a 130-114 win for the Warriors.

While Durant attracted much of the buzz, Thunder forward Russell Westbrook was also the center of attention. Westbrook erupted for 47 points, 11 rebounds and eight assists in an outstanding performance. Guard Victor Oladipo scored 20 points with four assists, while center Steven Adams also added 13 points and three rebounds. Although the team fought hard, they were not able to overcome their 19 total turnovers.

In a game of this magnitude, tensions certainly ran high. Many have speculated about the relationship between Westbrook and Durant and whether or not the two have spoken since the departure. Heading into a timeout late in the third quarter, the two players finally let each other have it.

Westbrook and Durant jawing after the timeout. pic.twitter.com/wu8nQTHodX

However, the drama didn’t stop there. Thunder forward Andre Roberson would later foul Durant while driving to the basket, which led to a very heated exchange.

After their big road win, the Warriors have only two games remaining before the all-star break. The team will travel to Denver on Monday to face the Nuggets and then host the Kings on Wednesday.

The Thunder are set to face their former head coach Scott Brooks when they travel to Washington on Monday. The team will play their last game before the break on Wednesday against the Knicks.

Matthew is currently a senior, majoring in telecommunications with a minor in business administration.
@matt_levay
Previous Spieth Lands Ninth PGA Victory In Dominant Fashion
Next Orlando Magic Look to Bounce Back Against The Heat Tonight After a Tough Loss