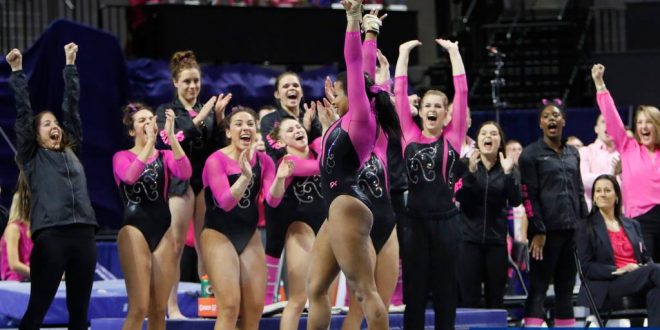 No. 3 Florida Gators Gymnastics Take On No. 23 Arkansas

After a perfect 10 for the Florida Gators Gymnastics team and their highest team score of the season now the team will travel to Fayetteville to take on the Arkansas Razorbacks.

No. 3 Florida will visit No.23 Arkansas at the Barnhill Arena. Friday’s meet is the Razorbacks Pink Meet and will be the Gators third appearance in a Pink meet. It will also kick of the SEC Network’s Friday Night Heights action.

During last week’s meet Florida turned the nations fourth-highest total of the season with a 197.975 just .025 from reaching the 198.000 mark with the win over the No.9 Georgia Bulldogs.

Players to watch during Fridays meet will be Junior Rachel Slocum who set her collegiate best of 9.975 on her vault and took her second consecutive win. Junior Alex McMurtry who earned a 10.0 on the uneven bars, which was her second perfect score in the nation for this season.

Another key player for the gators will be Kennedy Baker. Baker, who only competed on bars this last week due to the stomach flu, will hope to do her usual All-Around against the Razorbacks. Baker earned a perfect 10.0 on her floor exercise against Auburn, so keep a look out for her flawless routine.

Friday’s match will be the fourth of a six-meet stretch of live SEC Network appearances for the Gators. The meet can also be found on SEC Network+. Tune in at 6:45 to watch the pre-meet show and the meet is set to begin at 7 p.m.

Previous Preview: Gator Baseball Opens Season Against William & Mary
Next The NBA Goes to New Orleans for the All-Star Weekend