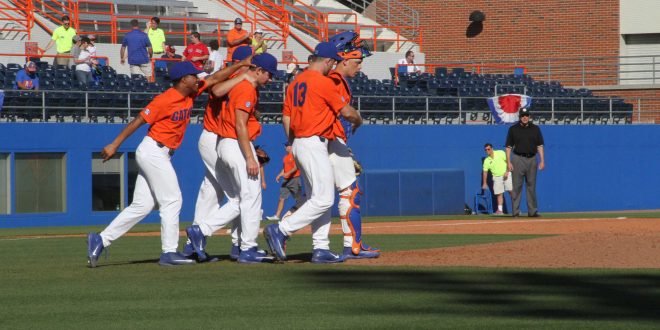 The second ranked Gator baseball team will look to continue its opening weekend momentum when they take on Jacksonville University in a two-game home-and-home series. They’ll play Tuesday night in Jacksonville with sophomore Micheal Byrne getting the start, before playing Wednesday night at McKethan Stadium.

Florida is coming off a season-opening sweep of William and Mary this past weekend. The Gators started the series off shaky, getting an ugly 5-4 comeback win on Friday night. Byrne was the savior in that game, earning the win after tossing a scoreless seventh, eighth, and ninth inning, all while allowing only one hit. Florida head coach Kevin O’Sullivan said Byrne was the reason the Gators won that game, and seems to have rewarded his performance with the start on Tuesday night.

Missed any of the @GatorsBB action from this weekend vs William & Mary? Check out my recap with @FJuncadella for ESPN Gainesville. pic.twitter.com/4HSQW5HHcy

Florida shook off the rust from Friday and got better as the weekend went on, as O’Sullivan noted. Brady Singer turned in a strong pitching performance (5.0 innings, 1 ER) on Saturday in the Gators 8-1 win, while the bats came alive on Sunday in Florida’s 11-6 win. Jackson Kowar tallied an impressive 10 strikeouts in 5.2 innings of work while giving up just two hits and one earned run. Pre-season All-American Dalton Guthrie hit .417 over the weekend, including two hits and one of his four RBI from the series on Sunday.

Among the newcomers to the team, freshman Austin Langworthy is an early standout for the Gators. He had quite the debut weekend, starting in left field on Friday and Sunday, and tossing 2.2 scoreless innings in relief on Saturday to go along with his 4-9 performance at the plate over the three games. That includes the first collegiate home-run for the local kid from Williston High School, via a two-run shot in the second inning on Sunday. O’Sullivan heaped praise on Langworthy, saying fans will continue to see his All-American- type potential.

There are a few bats to look out for on the Dolphins. Sophomore outfielder John Cassala went 3-for-6 over the weekend with four RBI, and sophomore infielder Angel Camacho had three RBI as well as three runs scored over the weekend.

First pitch from Jacksonville tomorrow is set for 6 p.m.