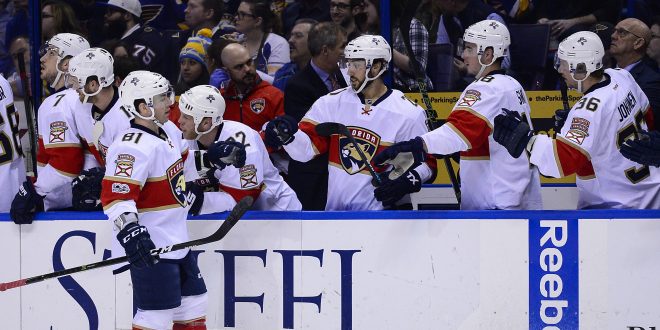 The Florida Panthers began their road trip on February 11th when they ventured into Nashville for a match against the Predators. Since then the Panthers haven’t looked back. For the next four games Florida has gone into enemy territory and dominated. Last night was no different as the team defeated the St. Louis Blues 2 – 1.

Young talent leads the way for the Panthers

The Panthers came out of the initial puck drop strong as they were on the board first. Florida center, Jonathan Marchessault tallied the initial goal ten minutes into the first period off an assist from center Nick Bjugstad.

Marchessault, only three years in the league so far, is having a career season. Last night marked the forward’s 17th goal of the year, while only having 25 in his career. Additionally, it makes it his 35th point this year with only 20 from his previous time in the NHL.

Reimer has been fantastic for his side for his past five starts. The sixth year goalie hasn’t lost in regulation since facing the Bruins in early January. Last night Reimer was a stone wall, as he made 27 saves on 28 shots on goal, earning him the second star of the night.

Something to note from this game is St. Louis’ had two power play opportunities. The Blues have one of the most dynamic offenses in the league. Their average 2.8 goals per game is ranked 11th, while their power play percentage is eighth in league capitalizing on 21.2 percent of man up chances. However, the Panthers are in the top half of the league in goals allowed, and their penalty kill percentage is third in the league. The team has an impressive 85.2 percent success rate when facing the power play.

Florida successfully stifled two of St. Louis’ man up opportunities last night. Their staunch defensive front created a transition that allowed the Panthers to capture this game. As the clock was expiring in the third, center Vincent Trocheck received a loose puck close to the blue line. Trocheck fired at a crowded crease, and Blues goalie Jake Allen didn’t even have time to react to the puck.

Missed the call? You can find it right here.

Trocheck said Allen couldn’t even see the puck due to his teammates screening the shot. Trocheck, only in his third year of NHL play, leads his team in goals with 21, and in points with 42. Last night  marks his sixth game in a row with a point under his tally.

The Florida Panthers are a young franchise and their team is equipped with fresh faces. Combined with their veteran leadership that’s sprinkled throughout the roster it’s no surprise the team is successful. While the team is certainly talented, they have a long way to go before becoming a championship contender. But with enough confidence to close against a strong Blues team, it bodes well for a young team like the Panthers.

For now, the Panthers will have an upcoming four game homestand on their mind. But we’ll see if they can carry this momentum continuing into the latter half of this season and into playoffs.

"Now, everything's starting to come together."

Previous Why Sacramento, Why?
Next Seminoles Basketball Goes 17-0 at Home