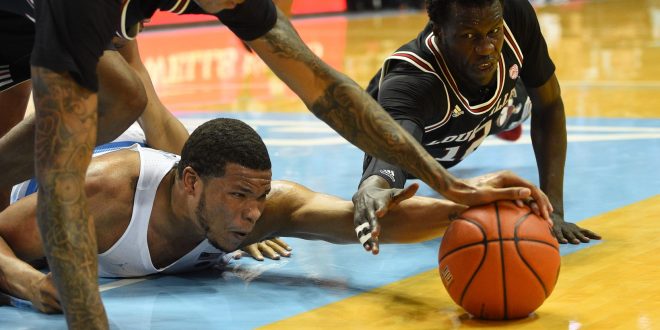 There was a rowdy crowd of basketball fans on Chapel Hill on Wednesday. Not only did they erupt to news of rival Duke going down to Syracuse in a buzzer beater, but North Carolina topped Louisville to take a strong grip on the lead in the Atlantic Coast Conference.

The 74-63 win for the Tar Heels and a loss by the Blue Devils puts North Carolina in a position no team in the ACC has been in all season…they are in first place (24-5, 12-3)

with a two game lead in the standings over Louisville, followed by Duke, Florida State and Notre Dame.

North Carolina did what they needed to do to beat out a physical Cardinals squad. The Tar Heels lead the nation in rebounding per game and stayed true to that last night finishing with a 46-33 rebounding advantage. Kennedy Meeks was the dominant force hitting the boards for 10 rebounds.

Offensively, Justin Jackson was the go-to guy finishing with 21 points on the night. Overall, the Tar Heels may not have shot phenomenally at only a 37 percent clip but they did hit the marks at the free throw line, making 21 of 29 and shooting 7 of 18 in three pointers (39 percent).

The Cardinals on the other hand, didn’t get the job done in the offensive category. Although they trailed North Carolina 33-30 at the half and was able to tie up it up at 40 coming out of the locker room, they couldn’t get shots to fall as the half rolled on and the Tar Heels went on a 13-3 second-half run.

Donovan Mitchell kept the team in contention with 21 points for the Cardinals although the team struggled. Louisville made just 5 of 20 three point attempts and 4 of 13 free throws.

With only three games left in the regular season, a win for either team carried a lot of weight in determining post-season fate. But it wasn’t the heat of the match up that got to Louisville head coach Rick Pitino, it was a fan.

As Pitino headed into the locker room at half time, you could see Pitino yelling at the stands before heading into the tunnel. A video posted on Twitter showed an animated Pitino shouting toward the seats before being led into the tunnel.  The fan was ejected.

Rick Pitino is very displeased with a UNC fan pic.twitter.com/z4bYUuyMw6

After the game, Pitino commented on the incident and said the fan got in his face and said something he didn’t like. What seemed to bother him most was that the fan was not a student, but an adult. North Carolina head coach Roy Williams apologized for what happened to Pitino and hopes it never happens again at North Carolina.

Pitino says regardless of the incident, he won’t base that as a judgement of the North Carolina program, saying it is still a classy place.

Up next, the Cardinals host Syracuse on Sunday while the the Tar Heels visit Pittsburgh on Saturday. After that, North Carolina will see Virginia and then home against Duke. Two wins would secure an ACC title with even the possibility of a number one seed in the NCAA Tournament.