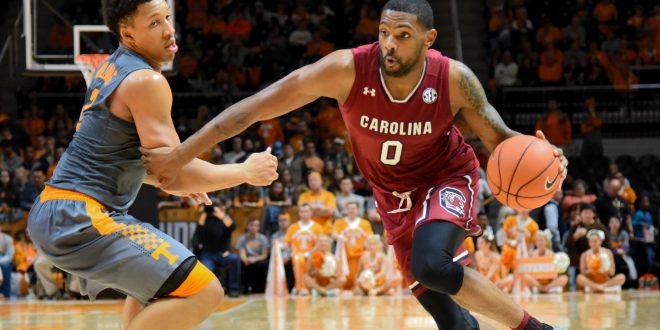 On Saturday, the South Carolina Gamecocks will take on the Tennessee Volunteers in Columbia, SC. The Vols are (15-13,7-8 SEC) and the Gamecocks are (20-8,10-5 SEC). Both teams are looking to get more wins under their belt as regular season play comes to a close.

In their last meeting earlier this year the Gamecocks defeated the Vols 70-60 in Knoxville. However, overall Tennessee leads the series 42-26. In the SEC a Florida, Kentucky, and South Carolina seem to be locks for the tournament but it’s still important to finish out strong. Tennessee however needs this win because they are on the bubble with wins over Kentucky and Kansas State earlier in the season.

The Gamecocks will play two of their final three regular season games at home starting on Saturday while the Vols enter a two game road swing.

However UT’s Admiral Schofield has stepped it up and over the last three games. He’s averaged a team high 15.0 points and 6 rebounds per game. He’s also been shooting 56.0 percent from the floor. Tennessee ranks sixth in the SEC in scoring offense at 76.1 ppg, seventh in scoring margin (+2.9), sixth in free throw percentage at 72%, and fifth in rebounding offense at 38.2.

South Carolina is the league’s top team when it comes to scoring defense. They allow only 64.7 ppg this season and their opponents are shooting 39.8 percent from the field.

The Gamecocks also have several star players on their roster as well. Sindarius Thornwell, an SEC Player of the Year candidate, leads the league in scoring with 21.2 points per game. He is also the best rebounder on the team with 7.4 rpg and leads the league in steals with 2.3 spg. Even though their last game against Florida in Gainesville ended in a loss Thornwell added 23 points and 10 rebounds for the Gamecocks. Tennessee Men’s basketball coach Rick Barnes is aware of the fact that “they’re a team that’s going to pressure hard”.

"There's no question he's the most valuable player in the conference this year." @Sin_City_803 for #SECPOTY pic.twitter.com/Rp5jNl44fA

The South Carolina Gamecocks will take on the Tennessee Volunteers at home on Saturday afternoon in Columbia in the Colonial Life Arena. The game will be aired on the SEC Network at 1 PM on Saturday.

Previous No.3 Gators Defeat No.13 Missouri
Next No. 13 Florida Looking For First Regular Season Sweep of Kentucky Since 2014