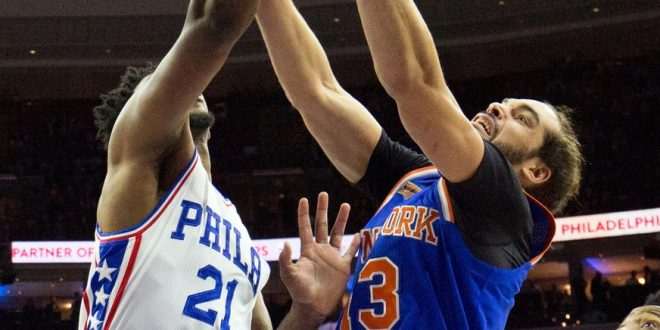 Gainesville the Rock high school star Joel Embiid and Florida Gator star Joakim Noah are both ruled out indefinitely for the remainder of the 2017 NBA season.  The Sixers switched Embiid’s status from day-to-day to out indefinitely Monday.  This news comes three days after they shut down 2016 No. 1 pick Ben Simmons for the remainder of what would have been his rookie season.

Noah has battled nagging injuries throughout his tenure in New York. He has not played since Feb. 4 due to a hamstring injury and only played more than 21 minutes once in the previous 10 games.

The Philadelphia 76ers have taken on the motto of “Trust the Process.” The centerpiece of that process: Joel Embiid, an alum of The Rock School in Gainesville.  The 76ers need to “Trust the Process” for a little longer as Embiid has been ruled out indefinitely for the remainder of the 2017 season.  Embiid has battled injuries throughout his tenure in the NBA.

The @Sixers announce Joel Embiid is out indefinitely with swelling in his left knee.

The 76ers selected Embiid with the third pick in the 2014 NBA draft.  Embiid missed his first two seasons of his NBA career with foot injuries.

On the season, Embiid is averaging 20.2 points, 7.8 rebounds, 2.1 assists and 2.5 blocks in just 25.4 minutes. He has been the clear frontrunner for Rookie of the Year from day one, but has only played in 31 of Philadelphia’s 58 games.

After a face-up drive and dunk during the third quarter of a Jan. 20 meeting with the Portland Trail Blazers, Embiid went down hard and came up limping:

Three days after announcing that they shut down 2016 No. 1 pick Ben Simmons for the remainder of the season, the Sixers announced Monday that Embiid too will be joining him on the pine for the foreseeable future as the Sixers injury woes continue.

This decision to play it safe with Simmons and Embiid may benefit the Sixers the most in the long-run as they can aim for another lottery pick to add to their pool of young talented players in the 2017 draft.  The Sixers could desperately use an outside option to pair with their stud frontcourt.

Noah’s underwhelming season has been hampered by various injuries as he’s also dealt with shoulder and hamstring issues.  Noah, 32, has averaged 5.0 points and 8.8 rebounds in 22.1 minutes per game this season in 46 appearances.

The Knicks signed Noah to a four-year, $72 million contract over the summer with the hopes that he could be a defensive anchor for the club.  Knicks Head Coach Jeff Hornacek has not committed to Noah as the starting center for next season.