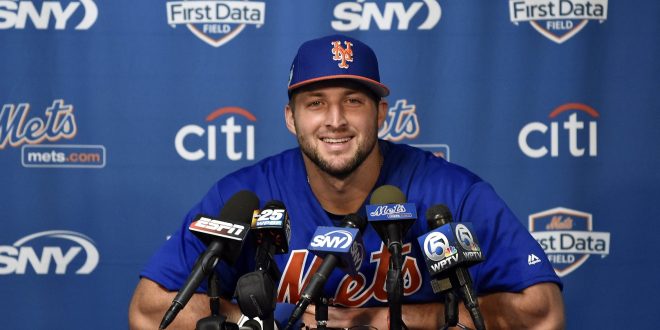 Former Gator quarterback and Heisman winner Tim Tebow is enjoying his journey in Major League Baseball. Tebow opened up his first full year in baseball yesterday at the New York Mets spring training in Port St. Lucie, FL. Since signing a minor league deal in September, Tebow has participated in the instructional league in Port St. Lucie and played in the Arizona Fall league.

“I’m excited about that opportunity to work for this.” @TimTebow on pursuing his dream and the fan support. https://t.co/kQgwG4Dvj3 pic.twitter.com/Bn6ylpxf2d

In January, the Mets released their Major League spring training invites, and Tebow was not on that list. But, it has been said that he will be on loan from minor league camp and could participate in some of the team Grapefruit League games. Yesterday, was his long awaited arrival to minor league spring taring, and fans and media all are anxiously anticipating how he will play and preform this season. Tebow says he’s not going to worry about what everyone is writing and saying, for him he just wants to enjoy the process.

His first few days of spring training will be made up of stretching, sprints, fielding and hitting drills. During batting practice, Tebow hit nine home runs over the fence with six going to the opposite field. Tebow says that he is trying to take what he has learned in the last three months and continue to build on those things.  The Heisman trophy winner, who hasn’t played baseball since high school has been the center of attention for fans, yet he is still just another minor league player attempting to make it to the big leagues.

Another former Gator who is in attendance at the Mets minor league spring training is Peter Alonso. During Tebow’s first home run of professional baseball in the Instructional League, Alonso was the first of his teammates to meet him and congratulate him at home plate. Tebow’s future in baseball is uncertain but bright and his inspirations to continue a career in professional sports is high.