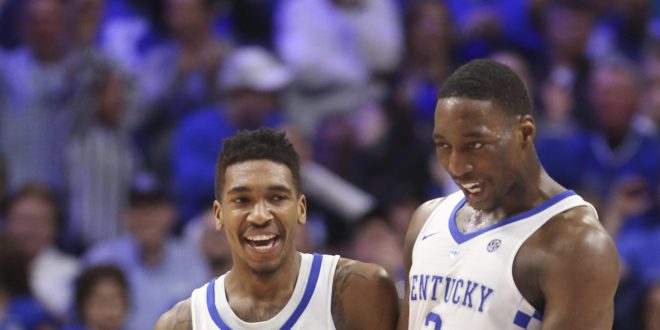 Tuesday’s night comeback win over the Vanderbilt Commodores (16-14) wasn’t just any senior night for the Kentucky Wildcats (25-5). Before tipoff, senior forward Derek Willis hyped up the crowd by proposing to his girlfriend. But that wasn’t the only thing that caught the crowd’s attention on Tuesday night.

A poor first half performance resulted in the Wildcats falling behind Vandy by as many as 19 points. By the end of the night,however, the Wildcats were able to successfully complete the largest comeback win in John Calipari’s coaching tenure at Kentucky.

Vanderbilt started the game red-hot from the field, outscoring Kentucky 22-6. But as we have seen over the years, a Calipari-led Kentucky team isn’t just going to fold and go away. They stayed resilient and stuck to the identity that got them to the top of the SEC conference. The Wildcats tried to stay within striking range, as the first half ended with the Commodores holding a 30-24 lead.

After a Calipari halftime speech, it seems the Wildcats came out in the second with their winning mindset back. They clamped down on defense and started getting easier shots for their star freshman, Malik Monk. Monk finished with 27 points, with 20 of them coming in the second half. Kentucky forced 18 turnovers while committing only 14 personal fouls. That’s in comparison to the 25 fouls Vandy committed. The Wildcats also drastically improved in their defending of the perimeter in the second half, as the Commodores barely had time to breathe while shooting. The Wildcats ended up outscoring Vandy 49-37 in the second half to finish off a 73-67 win on senior night.

While the first place Wildcats were making history at home, the third place South Carolina Gamecocks (22-8) were fighting to keep their NCAA Tournament hopes alive. The Gamecocks hosted the Mississippi State Bulldogs (14-15) Tuesday night. South Carolina controlled most of the game in every category and walked away with a 63-57 win. The Gamecocks will finish their regular season Saturday when they face Mississippi. South Carolina’s Sindarius Thornwell doesn’t think his team has done enough yet to be confident about getting in the NCAA Tournament, but by winning their season finale on the road that could change.

One of the youngest programs in the nation, the Missouri Tigers (7-22), honored their two seniors during their own Senior Night pregame ceremony. Despite being the youngest, the Texas A&M Aggies (16-13) showed no mercy defeating them last night.  The Aggies came away with a 60-43 win.