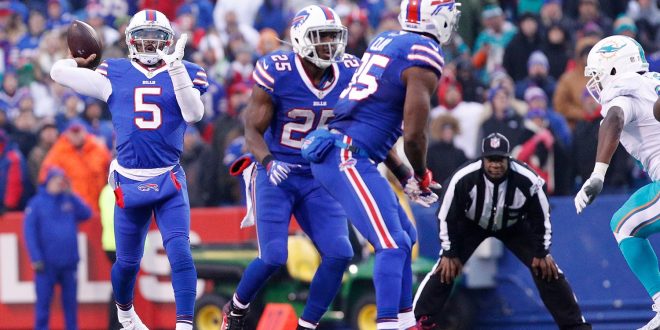 Buffalo Bills in a Tricky Situation

The Buffalo Bills have been the epitome of an average football team; never good enough to make the playoffs but never bad enough to receive a top five pick in the draft. They are 24-24 over the past three seasons, and have not cracked double digit wins or made the playoffs since 1999. It seemed like that was going to change last year after a 4-2 start, which included a blowout victory on the road against the eventual Super Bowl Champion New England Patriots. Even with above average play from quarterback Tyrod Taylor, the Bills went on to lose seven of their last ten games and missed the playoffs yet again.

What Should the Bills Do?

Now the Bills find themselves in an extremely tricky situation. Taylor and the Bills agreed to a five year, $90 million contract extension last offseason. The terms of the deal stated that the second year of Taylor’s contract would be a team option, so the Bills could decide if they want to keep him or not. The new NFL league year starts on March 9th, but the Bills have until March 11th to make a decision on the Virginia Tech product. If the Bills do decide to guarantee Taylor’s contract, he will be guaranteed $30.75 million over the next two years, including $27.5 million for the 2017 season. There are numerous questions as to whether Taylor can be a franchise-type player, so let’s look a little deeper.

The 27-year old dual-threat quarterback led the Bills to a 9-7 record in 2015 by throwing for 20 touchdowns, 3,036 passing yards, six interceptions, and a 99.4 passer rating. He also rushed for 568 yards, which ranked second for quarterbacks, only behind Cam Newton.  His 99.4 passer rating ranked seventh in the league, behind the likes of Russell Wilson, Andy Dalton, Carson Palmer, Tom Brady, Kirk Cousins, and Drew Brees.

Taylor was expected to make the leap into the upper echelon of quarterbacks, which is why the Bills rewarded him with such a hefty contract. He failed to make this leap in 2016 after recording 17 touchdowns, 3,023 passing yards, six interceptions, and an 89.6 passer rating. He continued his scrambling ways, rushing for 580 yards to lead all quarterbacks. While his production didn’t decline dramatically, it didn’t improve as expected. Now the question is do the Bills want to pay a slightly above average quarterback $27.5 million next season?

The Bills seem to be exploring every possible option, including trading him. New head coach Sean McDermott offered some praise for his quarterback, but seemed very noncommittal on the decision.

“I’ve been impressed by his work ethic… having said that the decision making process continues. We’re going to exhaust every resource, every avenue, and every option available to us.”

While McDermott knows how critical the quarterback position is in the NFL, he also wants to make sure the Bills are making the correct short and long term decision.

What Will the Bills Do?

Expect the Bills to wait until the last possible day to make a decision. There’s no reason to rush, and keeping the trade window open could give another team an opportunity to make an offer. With many teams in the market for a quarterback and a weak upcoming quarterback draft class, Taylor’s trade value won’t ever be higher. There’s no telling what the Bills will do with Taylor, but it’s not likely they will end their playoff drought with or without him considering Brady and Belichick still reside in the AFC East.