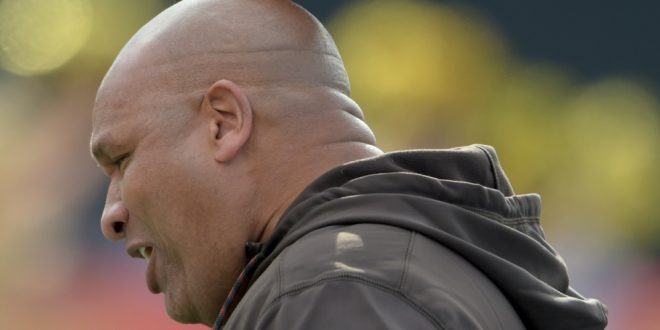 The Future of the Cleveland Browns

The Cleveland Browns just had one of their worst seasons in the last 25 years. The struggling franchise finished the 2016 season with a record of 1-15 in Hue Jackson’s first year as head coach. The results ultimately led the Browns to the number 1 pick in the NFL Draft. Now the pressure is on the Browns. Will they draft quarterback Deshaun Watson out of Clemson or will they trade up to have multiple picks throughout the draft? What about the the impending free agents? These questions will need to be answered in due time by head coach Hue Jackson and general manager Sashi Brown.

This is what GM Sashi Brown had to say on the number 1 pick:

Question Marks for the future

The Browns have a number of questions and holes to fill in multiple positions. Quarterback Robert Griffin III once again had an injury-plagued season in his first year with the Browns as he only played in 5 games. In his rookie season, Cody Kessler proved capable of managing games for the Browns but more than likely is not the future. Veteran quarterback Josh McCown experienced an injury-plagued season as well and started 5 games for the Browns. McCown is now a free agent and is garnering interest from multiple teams including the Cowboys. Speaking of free agents, quarterback turned wide receiver Terrelle Pryor, who had a standout year for the Browns this past season with 77 receptions and 1,007 yards, officially became a free agent after the Browns declined to use the franchise tag.

One of the most intriguing question marks is Browns wide receiver Josh Gordon. Gordon hasn’t played in the NFL  since the 2014 season and just recently applied for reinstatement. When active and healthy Gordon has proven to be a legitimate vertical threat for opposing defenses. If those skills are in tact (and whether or nor he’s reinstated) remains to be seen.

Despite all the question marks on offense and defense, the Browns still without question have talent on the roster. Veteran offensive tackle Joe Thomas leads the way as he’s been one of the most durable and reliable offensive linemen in the league for the last 10 seasons and remains committed to the Browns and the rebuilding process. The Browns running game this past season was one of the few highlights. Running back Isiah Crowell developed into a legitimate running threat, leading the Browns with 952 yards and 7 rushing touchdowns this past season. Rookie wide receiver Corey Coleman had 33 receptions for 413 yards and 3 touchdowns, and will look to build on those numbers in the upcoming season. On defense the Browns still have 2-time pro bowl corner Joe Haden and linebacker Jamie Collins, who the Browns received in a trade this past season from the Patriots.

In the draft the Browns could potentially add DE Myles Garrett of Texas A&M to help bolster the defense. The Browns could also draft the aforementioned Deshaun Watson or even Ohio native Mitch Trubisky, a quarterback out of the University of North Carolina. The possibilities are endless and with the current talent in place, the future for the Browns does have some semblance of hope.

Hue Jackson: I feel that Terrelle Pryor wants to be a part of what we're doing. We hope he stays with us. pic.twitter.com/QkdjoA6sPw

Previous Cavs vs Celtics Recap: The Battle Of The East?
Next Buffalo Bills in a Tricky Situation