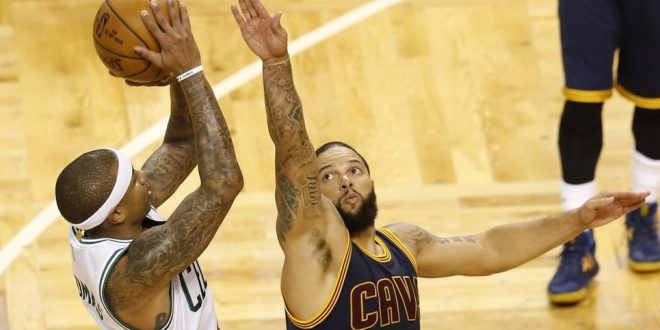 Cavs vs Celtics Recap: The Battle Of The East?

Last night, the Boston Celtics hosted the Cleveland Cavaliers in a showdown that went to the final moments of the fourth quarter. Fortunately for the Celtics, they came away with the 103-99 win, helping them close the gap between them and the No.1 ranked Cleveland Cavaliers. The game was a back and forth battle from start to finish that consisted of 24 lead changes and 19 ties.  It was also the first night Deron Williams suited up in a Cavs uniform. Williams had a chance to be the hero and win the game, but could not deliver the lead-changing three in the final 10 seconds.

Isaiah Thomas had a stellar game, leading the way with 31 points. Thomas did not do it alone though, as Jae Crowder chipped in with 17 points and 10 rebounds. The two put on a show that would outshine the James – Irving duo that accounted for 56 of the Cavs’ points. Throughout the game seemed to be a back and forth battle between arguably the two best point-guards in the game; Isaiah Thomas and Kyrie Irving. Thomas was clearly the center of his team, but Irving’s ball handling skills were superior. These were on display during Irving’s game-tying layup in the fourth quarter. Although Thomas’s defense wasn’t the greatest, the Celtics seemed to feed off of his fast-paced movement down the court. The Celtics as a unit looked very poised and shifty, not hesitating to give the next man the ball if their shot was not there.

The next time the two teams meet will be on April 5th at 8 p.m. It remains to be seen just how high the stakes will be come April. If Wednesday night was any indication, it’s sure to be a thriller.