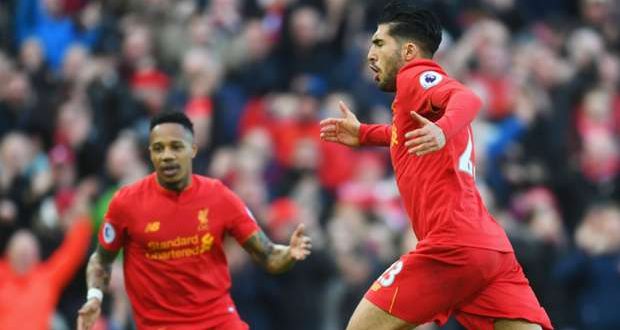 Liverpool survived an early goal from Burnley by coming back with two goals in 16 minutes of play to take all three points at Anfield and solidify their fourth place standing.

The day started off tense for Jurgen Klopp’s side, as his team found itself down within the opening ten minutes of play.

Burnely knew they had to be efficient in attack coming into the game, knowing they’d have limited opportunities on the ball and in front of net. The held possession for only 36% of the match and registered only one shot on goal. That one shot, however, gave them the 1-0 lead via Ashley Barnes.

The visitors launched a quick direct attack and found right back Matthew Lowton about fifteen yards from midfield. He took one touch forward and sent a brilliant curling through ball in behind the defense. The pass went beyond the feet of Andre Gray but found Barnes all alone at the back post. Barnes slid and stuck out his right foot, with the ball redirecting towards the right post and into the back of the net.

When you stun the crowd at Anfield #Burnley #LFC pic.twitter.com/zsaPrfsJ8g

That lead would not last until half-time, as Georginio Wijnaldum continued his knack at scoring crucial goals in key moments. He scored the game-winner in the fifth minute against Manchester City earlier in the season and scored the goal to ice the game against Arsenal last week.

Origi had been struggling with spacing and movement in the first half but made up for it by providing the cross to Wijnaldum on the stroke of halftime. Origi, on the left flank, cut onto his right foot to buy some space. His floating cross into the box found Wijnaldum who’s cheeky first-time attempt was blocked. Luckily for him, the ball fell right back to his feet, and his slight hesitation opened the space for him to tie up the game for Liverpool.

Burnley thought they were going to enter halftime with a 1-0 lead over Liverpool, but Georginio Wijnaldum had other ideas pic.twitter.com/sBUGt8IHOv

Fifteen minutes into the second half, Liverpool took the lead for good via a moment of quality from Emre Can.

Again it was Origi involved, as he cut inside and laid the pass off for an open Can about twenty yards from the box. His first touch with his right foot wasn’t great, but it worked in his favor. The ball had enough movement on it so that his shot, while aimed to the lower corner, had enough power and curl on it that it sneaked into the back of the net.

Emre Can and did put Liverpool up 2-1 on Burnley pic.twitter.com/zlz8HDBGJT

Liverpool hung on in the final thirty minutes to see out the win. The Reds now sit just one point behind Tottenham and Manchester City for second place. Burnley meanwhile remain firmly in the middle of the table. They currently sit in 12th place on 31 points, seven points clear of the relegation zone.