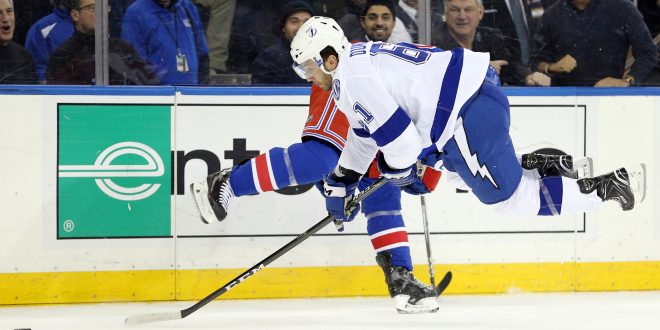 Tampa’s Brayden Point had the best game of his rookie season on Monday, which also happened to be his 21st birthday. Point recorded his first two-goal game in the NHL to secure a Lightning win in New York.

"It's my birthday but here's a gift for you." – Brayden Point. #TBLvsNYR pic.twitter.com/qOPodzsHWR

New York outshot Tampa 13-3 in the first period, giving them multiple opportunities to rack up points, but Tampa’s Peter Budaj made some major saves.

Steven Kampfer put one in the net for the Rangers five minutes into the first. This would be the only lead the Rangers had that night. Point tied it up with his first goal of the game shortly after the Kampfer’s goal.

The Lightning took a 2-1 lead after Gabriel Dumont scored his second goal of the season in the second period. He tipped the puck in past goaltender Antti Raanta’s stick on Jason Garrison’s shot from the right point.

Michael Grabner capitalized on a Tampa turnover and scored for the Rangers, tying the game 2-2 at 10:22 in the second period.The Rangers could not build after Grabner’s goal. New York failed to maintain the same level of intensity that it had in the first period and instead slipped through the cracks.

Lightning head coach Jon Cooper says the Rangers were dominant in the first and Tampa was fortunate to come out with a win.

Point scored the game-winner in the third period. He got behind the Rangers defense, stuck out his stick and slipped the puck into the net on Ondrej Palat’s slap pass. Point says the Lightning have their eyes set on a spot in the Stanley Cup playoffs and the goal is to keep winning.

Nikita Kucherov earned 20 points in the past 10 games after taking assists on both of Point’s goals.

Budaj, who joined Tampa’s roster in the Ben Bishop trade, was noteworthy in the net for Tampa. He stopped 26 of 28 Ranger shots and picked up his first win as a Lightning.

Raanta faced only 16 shots from Tampa in his second start since the Rangers announced that Henrik Lundqvist would be out with a hip injury. He gave up two goals on the first six shots he faced.

Tampa’s Alex Killorn says if the Lightning keeps working hard and other teams in the race lose, then they will get closer to securing a spot in the playoffs.

The Lightning have picked up points in seven of their last eight matchups. Tampa trails the Toronto Maple Leafs for the final wild-card spot in the Eastern Conference.

The Lighting will travel to Ottawa to face the Senators on Tuesday at 7:30 p.m. ET.