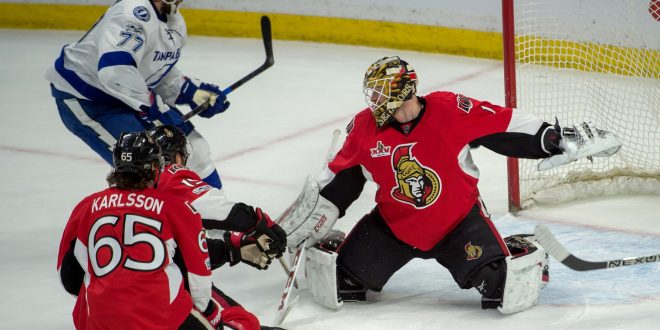 For the Tampa Bay Lightning their victory last night came down to one goal. Victor Hedman secured their 2-1 win over the Ottawa Senators after scoring the game-winning shot in the final minute of the game. Tampa Bay Lightning are 4th in the Atlantic Division with a record of 34-26-9 with a 4-game winning streak. The Ottawa Senators ended their 6-game winning streak last night leaving them currently 2nd in the Atlantic Division with a 39-22-7 record.

The last time these two teams faced one another was in February when Tampa Bay won 5 to 1.

The two goals were scored in game regulation time was made by Brayden Point in the first period and followed by Ottawa’s Tommy Wingels in the second period. No goals were scored by either team in the third period which lead the game to go into overtime.

In overtime with 54 seconds left, Ondrej Palat and Victor Hedman made a play that would secure their victory in Ottawa. Brayden Point has made 12 goals and 15 assists so far this season.  Victor Hedman, who has made 14 goals this season, knew that once Palat had the puck a goal was going to be made. That goal not only gave Hedman his season high, but led the Lightning to victory.

With that OT goal, Victor Hedman records his 14th goal of season for new career high; now has highs in goals, assists and points this season

According to Head Coach of the Tampa Bay Lightning, Jon Cooper, the mentality of the team is to focus on the games as they come instead of thinking ahead. After winning 3-2 against the New York Rangers on Monday they used the same mentality to add another victory to their list. The next game for the Lightning to focus on is playing Toronto on Thursday.

Toronto vs Tampa in Tampa on Thursday, March 16th

Previous The Razorbacks Return to the Tournament
Next No. 2 Florida Softball to Take on NDSU at Home