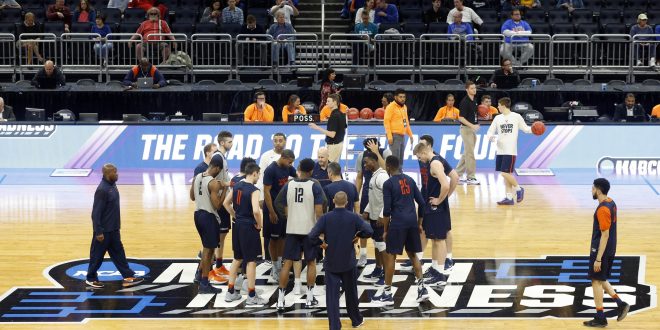 Mar 15, 2017; Orlando, FL, USA; The Virginia Cavaliers huddle during practice prior to the first round of the NCAA Tournament at Amway Center. Credit: Kim Klement-USA TODAY Sports

Of the “first four” kicking off March Madness Thursday, the No. 5 seed Virginia and No. 12 seed UNC-Wilmington is a classic case of contrasting styles of basketball coming head to head.

The Cavaliers and Seahawks will match up in the East Region opener at 12:40 p.m. ET at the Amway Center in Orlando, Fla. Don’t let the seeding fool you, the up-tempo Seahawks will be no cake-walk for the ‘Hoos, who are on a revenge tour to get to the final four after losing to Syracuse last year.

How About Those ‘Hoos?

The Cavaliers (22-10) defense has been a major stickler for many of the teams it has faced this season, including the likes of now top-seeded squads. During the regular season, Virginia featured the best scoring defense in the country holding opponents to only 55.6 points per game on 39.5 percent shooting. They only allowed now No. 1 seeded UNC to 43 points earlier in the year. The pack line defense also helped them to a win over Louisville.

Virginia has become one of the most consistent teams in the NCAA thanks to coach Tony Bennett. On the floor, they’re led by veteran London Perrantes, the team’s their captain, point guard and top scorer. As great of an asset that Perrantes is to the team’s success, he is the only player averaging double-digits in scoring.

Stirring Up Trouble: The Seahawks

Many have bracketology experts have UNC-Wilmington as one of their upsets, and for good reason.

Back to the big dance for the second year in a row, the Seahawks are the 2017 champions of the Colonial Athletic Association.

Last year in the tournament, UNC-W gave Duke a run for their money in the first round but bowed out.

Four players on the squad average double digits, including forward Devontae Cacok. Cacok is a six-foot-seven sophomore that leads the nation in shooting percentage.  He’s accompanied by C.J. Bryce (17.6 points per game), Chris Flemmings (15.8) and Denzel Ingram (14.5) who all can contribute to a backcourt offensive threat. The scorers hit 326 3-pointers, ranking 14th in the country.

On the flip side, they rank No. 242 in the country in scoring defense, giving up 74.9 points per game.

The spread out offense will be able to threaten the Cavaliers from all over the floor, plus they are much more experienced than the Cavaliers.

The Key to Win

The big determinant of who will move on to the second round will be controlling the pace of the game. If the Cavaliers can slow it down and pick up an offense that has lagged a majority of this season. The Seahawks on the other hand will most likely try to push the tempo and create turnovers.

It wouldn’t be Madness this month if upsets didn’t happen and the Cavalier-Seahawks is no different. There have been 46 upsets between 12-seeds over 5-seeds since the tournament expanded to 64 teams.

The winner of Thursday’s game will face either Florida or East Tennessee State on Saturday.