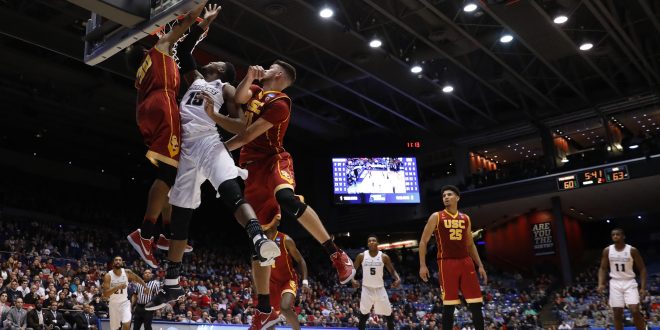 The Madness has begun. First Four teams, University of Southern California and UC Davis, are moving on in the NCAA Tournament. USC took on Providence in the opening round beating the Friars 75-71. UC Davis also came out on top against NC Central 67-63.

But, it wasn’t easy. USC had to comeback from a 17-point deficit in the second half.

Providence led by 15 points at halftime and went up by 17 to start the second. USC started to close the gap at the 10 minute mark leaving them only down by 5. The Trojans finally took the lead with 6:46 left on a jumper by USC’s Chimezie Metu. Metu’s play on both ends of the court kept the momentum going for the Trojans to put them up 71-64 with 1:23 left.

Southern Cal’s head coach Andy Enfield says how his team came back after such a huge deficit in the second half.

This comeback was USC’s 12th this season, which is the most in the nation. The USC Trojans now advance to the next round of 64.

History was made for the Aggies last night as they advance to their first NCAA tournament.

It also came down to the second half for the Aggies as they had to overcome 18 turnovers to make an epic comeback. Only down by three at the half, UC Davis quickly gained momentum and went on an 11-2 run while NC Central was just 1 of 9 from the field.

Chima Moneke had 18 points and 12 rebounds, while Brynton Lemar scored 15 points for the Aggies. Moneke says he doesn’t fear anybody and Lemar says he feels amazing to get this win.

Southern Cal will play against 6th-seeded SMU Mustangs in the first round of the East Regional in Tulsa, Oklahoma, on Friday.

UC Davis will also head to Tulsa, Oklahoma, Friday to take on No. 1 seed Kansas.