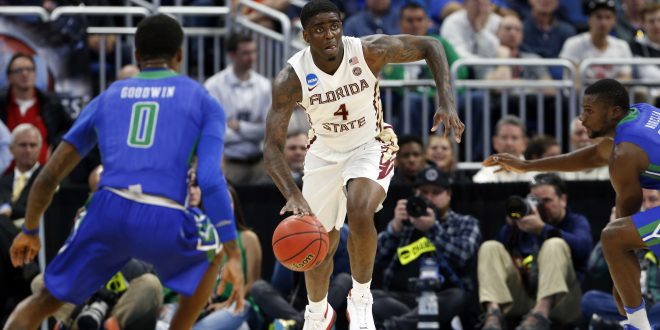 As the first day of the NCAA March Madness Tournament comes to an end, there was something very unusual that happened. Out of the 16 games that were played on Thursday, there were only two upsets. Those two upsets were: No. 12 Middle Tennessee State defeating No. 5 Minnesota and No. 11 Xavier defeating No. 6 Maryland.

One of the biggest questions of the day was in the West Region in regards to two of the Florida schools battling. The No. 3 Florida State Seminoles and the No. 14 Florida Gulf Coast Eagles were set in a first round match-up in the state of Florida. This meaning, there was no home court advantage to either team.

It was Florida State’s first tournament appearance since 2012 and they made sure that it was one to remember. The Seminoles let up a double digit lead at the end of the game due to sloppy play and missed free throws from the Eagles. Florida State matched up against a team that gets up and down the floor very well. They made adjustments defensively helping them hold FGCU to 29% shooting from behind the arc and 41% from the field.

On the other hand, the Seminoles shot 56% from the field. They were led by sophomore Dwayne Bacon who has given this team exceptional play all year. He led the team with 25 points. Bacon was given support from Jonathan Issac (17 pts, 10 reb), along with the rest of the starting lineup. Florida State also out-rebounded FGCU 46-26 with the help of 6-foot-10 Jonathan Isaac, 7-foot-1 Michael Ojo and 7-foot-4 Christ Koumadje.

Heading into this game they were going to need to do what they did well all season which was dunk the basketball and then hit their open shots. FGCU wasn’t able to do either of these against the Seminoles. They only had two dunks the whole game and shot below 50% from the field. They also only went 8-28 from three point range which wasn’t enough for FGCU. Head Coach of Florida Gulf Coast, Joe Dooley says that his team was out of control at times and that some of the shots his team took were as bad as turnovers.

Additionally, the Eagles were at a disadvantage when there tallest man, Demetris Morant, went down with a left foot injury. This really hurt their chances on the boards against a tall Seminoles team. The Eagles were led by Junior, Brandon Goodwin, who accounted for 28 of the 80 points and Zach Johnson had 17.

The Seminoles now have three straight opening game wins in the tournament and will not stop there. They will face the No. 11 Xavier Musketeers, who shocked the No. 6 Maryland Terrapins, on Saturday at 6:10 p.m. Be sure to tune in here to catch live coverage of all the NCAA Tournament games.