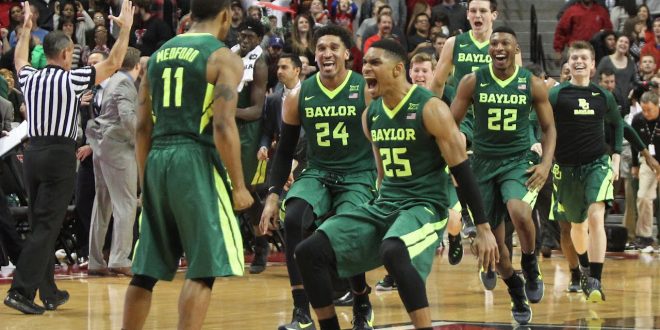 The last of the Round of 64 will face off today in the already-exciting NCAA Tournament. The Baylor Bears (25-7) will take on the New Mexico State Aggies (28-5) today at 12:40 in the East region.

Baylor received a three-seed on Selection Sunday after beating top 25 teams and ranking third in the competitive Big 12. At one point during the season, the Bears ranked first with a 15-0 record. Junior forward Johnathan Motley averages a double-double (17 points and 10 rebounds). On the contrary, NMSU’s top scorer Ian Baker averages 16 points. Also, top rebounder, Eli Chuha averages nine off the board.

However, Baylor’s spot in the Second Round is not secure, and Coach Scott Drew knows it. Two of Baylor’s losses were to Kansas State, who barely made the Tournament. Baylor also lost to Texas Tech, who missed the NIT. Spotty playing against mediocre teams has no place in the 2017 NCAA Tournament. Baylor failed to make it out of the First Round as a three seed two years ago. The Bears must forget about their seed number and play good basketball in order to make it out alive.

New Mexico State enters the Tournament as a 14 seed after ranking second in the Western Athletic conference. 21 fourteen seeds have knocked three seeds out of the first round. Although the tournament has been void of upsets so far, NMSU could be the first to do it, despite the fact that Baylor’s RPI is eleven and NMSU has yet to play a team in the Top 50, NMSU averages 79 points per game. They also shoot with a 47% field goal percentage. Baylor has choked against worse teams and could feel tournament pressure today.

But, Baylor blocks 63 points per game and averages 13 rebounds. Only four NMSU players average over 10 points a game, so NMSU will have trouble if shots are continuously blocked. No Aggie player scores half of their vital three-point shots, either. If NMSU wants to make it to the Round of 32, they must play their best game all season. Low stats and unclean shooting against one of college basketball’s top defenders can send NMSU home embarrassed.

Baylor and New Mexico State meet today in Tulsa, Oklahoma. Tip-off is at 11:40am.

With another week of college football in the books, the CFP picture is becoming more …