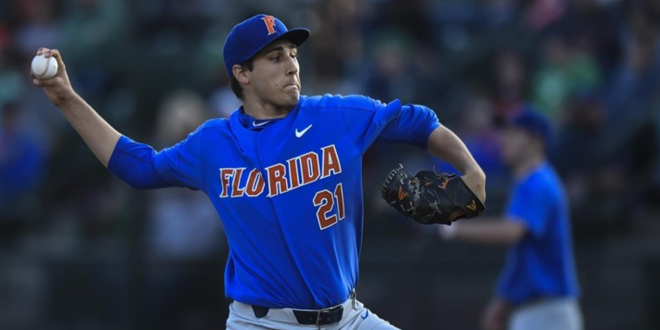 The fifth ranked Florida baseball team’s SEC opener did not go as planned Friday night at Auburn as the Tigers ripped the Gators 14-3. The Gators were able to get on the board first, but an off-night from starting pitcher Alex Faedo alongside a struggling offense didn’t mix well.

Faedo simply did not have it. The junior entered the night with seven walks allowed on the season; he walked six Tigers Friday night. Auburn did a great job of working the count and shortening their swings with two strikes. Faedo’s scoreless innings streak came to an end in the second inning at 23.1 innings.

Auburn ties the game with a RBI double. Faedo's scoreless innings streak comes to an end at 23.1 IP. #Gators

He threw just 4.1 innings, allowing six earned runs while walking six in 106 pitches. Kirby McMullen, Nick Horvath, and Nick Long came in relief and did not slow down Auburn’s offense.

The Tigers were led by their nine-hole hitter, Will Holland. He had a two-run home run in the fourth, walked with bases loaded in the fifth, and singled in the sixth finishing with four RBIs. Seven other Auburn players drove in runs on the night.

Trouble at the Plate

The Gators struggled at the plate once again. The only bright spots for the offense were Jonathan India and Christian Hicks. India homered for the third time this season for his only hit of the night. Hicks singled in a run in the second and scored Ryan Larson on a fielder’s choice in the ninth.

The team batting average is now .243.

Rest of the Weekend

Florida still has a chance at taking the series on Saturday and Sunday. Saturday’s game will start at 3 p.m. and Sunday’s game at 2 p.m; you can hear the games live on Country 103-7 The Gator.