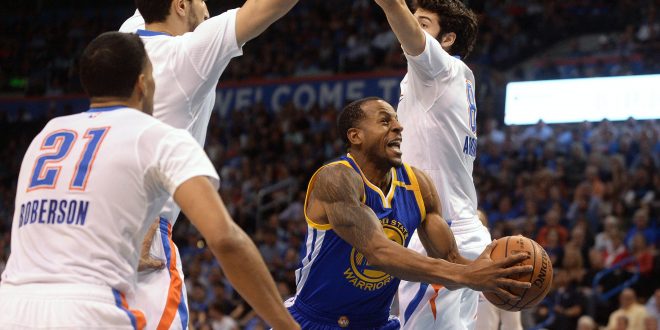 The league-leading Golden State Warriors blew past the Oklahoma City Thunder 111-95 Monday night in a chippy game that was never really competitive.  The Warriors were without star forward Kevin Durant as he continues to heal from a sprained MCL and bone bruise suffered on Feb.28, but that did little to ease the tension between this heated rivalry.

Curry and Thompson combined for 57 points and hit seven 3-pointers apiece as the Warriors silenced the Thunder in Chesapeake Energy Arena.  The Warriors outscored the Thunder 34-17 in the second quarter to blow the game open.  The Dubs received quality minutes from JaVale McGee and David West off the bench.

Even with Durant out, the negative energy between the two teams was on full display.  Curry exchanged shoves with Semaj Christon just before halftime as the two were jostling for position on a jump ball.  Technical fouls were issued to Curry, Christon, Green, and Westbrook for their roles in the skirmish.

Curry hit a pair of buzzer beater 3’s to close out the second and third quarters, including this crippling dagger following the scuffle.

The Thunder entered the game on a 5-game winning streak; however, the Warriors’ game plan was clearly focused on minimizing Russell Westbrook’s impact.  The Thunder’s superstar point guard was held to 15 points on 4-16 shooting.  The Thunder as a whole shot a putrid 19 percent from downtown.

Victor Oladipo was the team’s leading scorer tallying 17 points.  Enes Kanter contributed a double-double off the bench in the loss.

In all four games against the Thunder this season, Golden State has led by at least 25 points in each game.

OKC is now tied with the Grizzlies for the 6th seed in the Western conference.

The Warriors play at Dallas on Tuesday night. The Thunder host Philadelphia on Wednesday night.